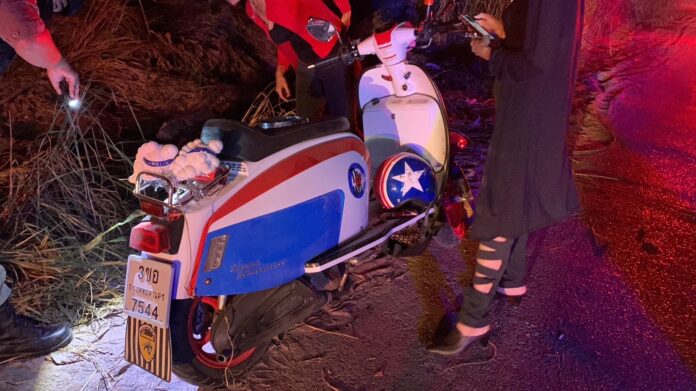 An Australian man who was an engineer died after a suspected road rage incident with a group of motorbike racers in the Pattaya area.

The Nongprue Police were notified of the accident last night (January 20th) at 11:30 P.M. on the Thung Klom – Tanman Road in Nongprue.

Police, emergency responders, and The Pattaya News arrived at the scene to find Mr. Graeme Foster, 59, an Australian national, lying near a power pole. He was unconscious and many bones were broken. He was rushed to a nearby hospital where he was tragically pronounced dead. Nearby, rescue workers found his damaged motorbike.

Mrs. Kittiyaphon Foster, 49, who is Mr. Foster’s wife, told Nongprue police that her husband was an engineer. Last night, Mr. and Mrs. Foster, along with their friends, were dining at a restaurant about one kilometer from the scene. At 11:15 P.M. they were heading back home. Her husband was riding his motorbike. His Australian friend was following him on a second motorbike. Mrs. Foster and her two daughters were driving in a car behind the two Australian men.

Mrs. Foster admitted that her husband had a few alcoholic drinks prior to the accident but stated that he wasn’t drunk and urged police to hunt down the group of motorbike racers. Nongprue Police stated a small amount of marijuana was also found at the scene of the accident. This particular power pole had claimed two other lives recently, according to local residents.

The Nongprue Police Chief Colonel Damrong Eiampairoj has ordered to hunt for the unknown and unidentified motorbike racers and checked CCTV nearby to find out what exactly caused the accident. However, at this stage, Nongprue police believe road rage caused the accident but it was unclear still which party instigated the incident or what the exact issue had been.

A 32-year-old gunman has surrendered to police after murdering a British Ex-pat in the Pattaya area.