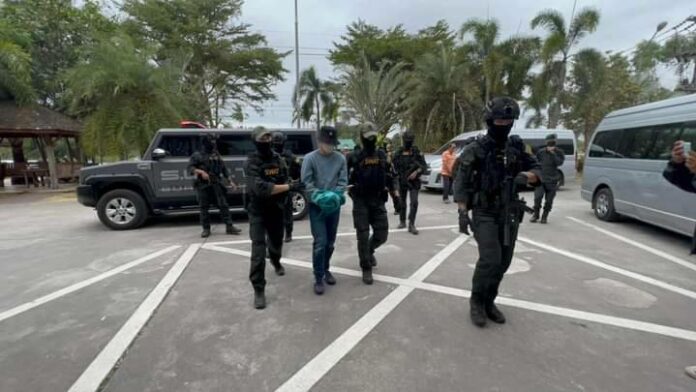 A 32-year-old gunman has surrendered to police after murdering a British Ex-pat in the Pattaya area.

A retired British engineer was shot to death in Pattaya while traveling home on January 5th. The cause of the incident remains a mystery.

Pol. Lt. Col. Ittipon Ittisaranachai, chief of Police Region 2, called for a meeting of immigration officials, tourist police, and investigators to track down the suspect.

Thai Police have identified a prime suspect in the murder of a British Ex-pat in Pattaya area. Officers told the Pattaya News that an arrest warrant has been issued for Mr. Apichart Boonsawat for murder and illegally carrying a gun in public

Today, (January 7th), Mr. Aphichart Boonsawat, 32, has surrendered to police with the handgun used in the crime. Mr. Aphichart has publicly apologized and stated he is sorry for what he has done.

Apichart told Pattaya police “I did not know the victim previously. While I was driving my car at Soi Chaiyapreuk, I was in the left lane waiting to turn. The victim, Mr. Roger, 70, who was on a motorbike, was behind me and loudly honked his horn. He also physically hit my car trying to get me to turn faster, but traffic prevented this.”

“I stopped my car completely to talk with him before a furious argument began and he backed off onto his motorbike to attempt to drive away. However, I became so enraged I chased after him for almost two kilometers as shown on CCTV video. I managed to cut him off and stopped my car in front of him and opened fire with my gun, shooting him four times because he insulted and angered me, causing me to go into a state of rage.” Apichart explained to police.

Police told the Pattaya News they have denied bail to Apichart. Apichart remains imprisoned and will be brought to court Monday morning, January 9th. He has obtained the services of a lawyer and has declined doing a reenactment as of press time. His lawyer, who was not identified, has pledged to attempt to continue to get him bail. Despite Apichart’s statement to police, it is unclear what his plea will be or a possible defense.

Apichart, known by his Thai nickname of Big, is reportedly a professional sports firearm shooting athlete with good skills and had won many shooting competitions. His firearm was legal and was used in his sports competitions, police added.