The alleged murderer was identified as Thai national Teerawat Tothip, 27, who was an unemployed local resident and living near the scene of the incident. He was arrested under an arrest warrant issued on August 7th and reportedly confessed throughout the allegations.

Nearby CCTV footage obtained by Royal Thai Police revealed that the suspect was found riding a motorcycle to the waterfall 12 minutes before the victim arrived and left the scene about three hours later.

According to the police investigation, the victim, Ms. Nicole Sauvain-Weisskopf, 57, the deputy protocol chief of the Federal Assembly of Switzerland, left her hotel in Ao Yon at around 11:30 AM. on August 3rd and was seen on CCTV walking up to the waterfall entrance at 11:49 AM. Teerawat stated that he allegedly spotted the victim at the waterfall when walking back from looking for plants to potentially attempt to harvest and sell. Ton Ao Yon Waterfall is remote, several kilometers away from inhabited areas, and requires a several-kilometer hike to reach. As a result, the area is rarely visited according to locals on the island, especially during the current Covid-19 pandemic. 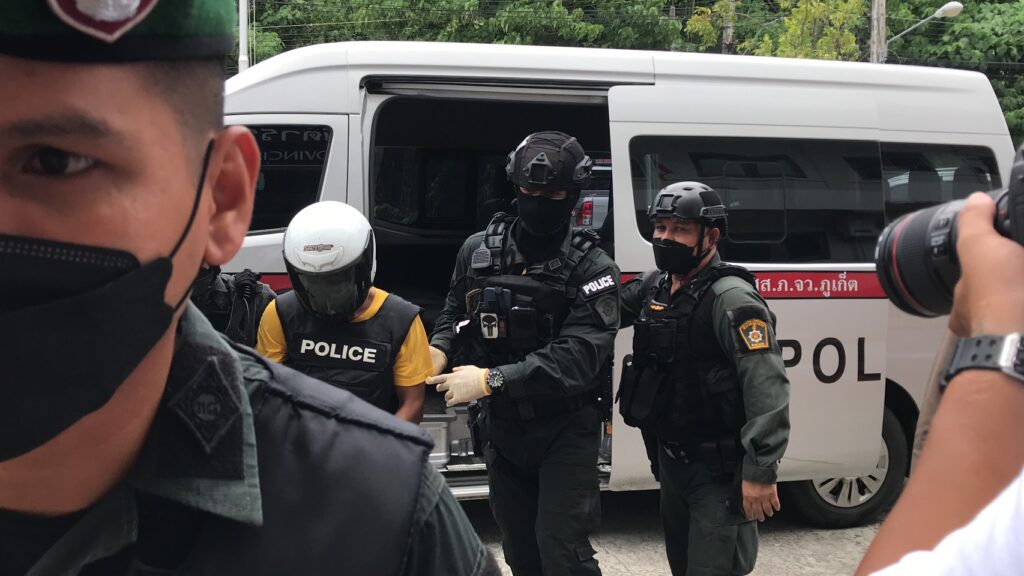 Teerawat stated to police that he observed the victim for a moment before reportedly strangling her from the back after attempting to take her bag from the bank of the waterfall area and failing. She struggled back but fell into the water during the fight and eventually died. The alleged killer then covered her body with a black plastic bag and hid her belongings in the nearby forest before escaping from the scene.

During the interrogation, Teerawat reportedly confessed that he had stolen the amount of 300-baht cash from the victim’s backpack in the hope to buy illegal drugs. He, therefore, was charged for homicide and theft. He officially denies sexual assault allegations, although police are still investigating. The victim was, based on photo evidence recovered at the scene found half-clothed, although the suspect claims this was because when he discovered her she was swimming alone at the waterfall area. Teerawat has continually stated that the motive of the crime was theft, not rape or murder. A phone-in to the suspect was also made during the conference this morning, he continued to stand by his statements that his motive was only to steal and did not intentionally kill the tourist.

“I lost my job. Covid-19 made me lose my job. I have a very low income. I had to work as a lawnmower and I had to give all my money to my girlfriend,” the accused stated via phone call at the press conference.

“I would like to apologize to all Thai people and the family of the deceased for what I’ve done. I sincerely apologize.” Teerawat concluded.

A re-enactment of the crime, required by Thai law for major cases, was conducted at the waterfall area this afternoon. Teerawat remains in custody with his next scheduled court appearance set for tomorrow, Monday, August 9th, 2021.