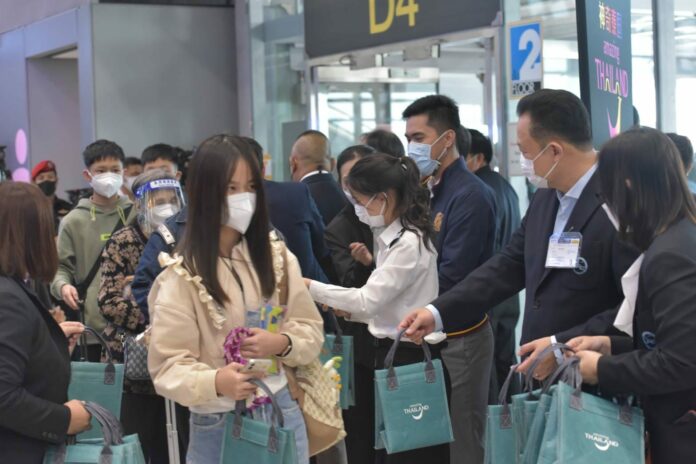 The 300-baht ‘land entry’ fee collection is expected to be officially take effect in June of this year.

The National Tourism Policy Committee, under the Tourism and Sports Ministry, approved a proposal of collecting a fee of roughly 10 USD, or about 300 baht, on foreign tourists who enter Thailand as a part of the tourism promotion fund, including tourist accident insurance and funds for affected labor and entrepreneurs in case of a financial crisis.

The Thai Tourism and Sports Minister confirmed that the 300-baht ‘land entry fee’ on all foreign tourists visiting the country would be eventually implemented, stressing that it would be used for tourists’ insurance and an emergency fund for those traveling in the country.

The Ministry of Tourism and Sports has decided to postpone the collection of a 300-baht ‘land entry’ fee until the fourth quarter of this year and is planning to propose the cancellation of the ‘Thailand Pass’ registration.

The Minister of Tourism and Sports Piphat Ratchakitprakarn revealed yesterday today (January 11th) that “In the next five years there will be 80 million foreign tourists visiting Thailand. The number is double that of three years ago before the Covid -19 pandemic.”

“On January 24th we will further discuss the longtime proposal of a 300-baht ‘land entry’ fee. The fee will not be collected from foreigners with Border Passes and work permits. We are also considering not collecting the fee from foreign tourists who are on a ferry or cruise one day trip to Thailand,” Mr. Piphat explained.

“This land entry’ fee will be suggested to the cabinet next month as we are planning this to take effect on June 1st of this year,” Mr. Piphat added.

The proposal has been extremely unpopular with tourists posting on social media, notes TPN. The Tourism Ministry has been pushing for the proposal for over a year, stating that all funds collected would be transparently used and to the benefit of tourists with both insurance for accident coverage and to improve major tourist attractions.

Critics of the proposal, however, have expressed doubt about if the insurance would be offered properly and the transparency of the funds received. The proposal has been continually pushed back after ongoing criticism on social media that it was the wrong time to implement a tourism entry fee. Many ex-pats have also expressed concern, stating that they are not tourists and should be exempt.