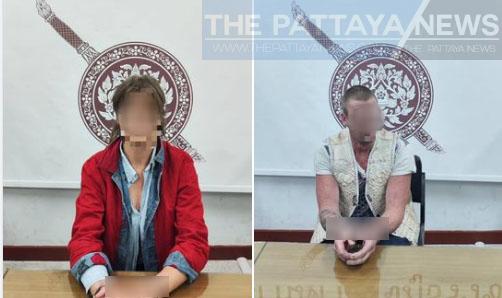 A German couple previously charged for resisting arrest in a dramatic incident in Pattaya were charged for illegally stealing and selling a rental car which was found in Malaysia.

The Wichit Police told the Phuket Express that on November 2nd, 2022 Ms. Petcharat Mankong, 22, who is the owner of the stolen car, filed an updated report to police about the vehicle after learning that the suspects involved were recently arrested in Pattaya for overstay.

Since February 5th, Mrs. Julia Poppelbaum, 34, German national, rented Petcharat’s SUV for a month for 32,000 baht. She paid a deposit of 14,000 baht before getting the car keys. She was expected to pay the remaining 18,000 baht later and then return the vehicle.

On February 12th Ms. Petcharat received a phone call from the office of the Narcotics Control Board that her car (officers checked license plates to find the real owner) passed through a drug checkpoint in Malaysia. The authorities were suspicious that the car might have been involved in an illegal drug network and wanted the owner to be aware.

Ms. Petcharat checked the GPS signal of the car which showed the car was in Malaysia. She tried to contact Mrs. Julia but failed.

Petcharat filed a report to relevant police agencies before an arrest warrant was issued many months later on November 14th for Mrs. Julia Poppelbaum and her boyfriend Mr. Thomas Veit, 47, a German national, for the accusation of theft.

Police found the couple had returned to Thailand and had been overstaying and waiting to be deported. They will now be charged with the theft of the vehicle and face those charges before being deported.

This was the same couple recently involved in a dramatic arrest in Pattaya for overstay, notes TPN Media, which you can see that video and article by clicking or tapping here.