Beach goers are concerned on less free space and vendor encroachment on the newly extended Na Jomtien Beach despite a large warning sign which was placed stating that the usage of the beach is for the public and not vendors and businesses.

The story came to light after a photo of almost no visible space for walking on the beach due to being taken over by seating and vendors was posted on the Facebook Page ‘Footpath Thai Style.’.

This is despite warning signs which were placed by the Na Jomtien Municipality telling people merchants and vendors are forbidden on the new extended Jomtien Beach for personal benefits. The beach is for public use only. 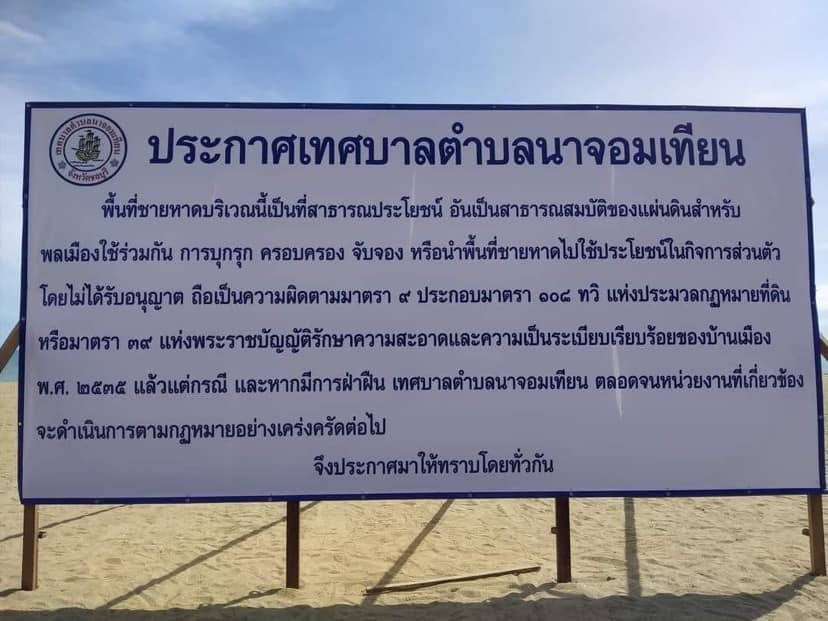 Beachgoers say the problem is only getting worse with nearly all the beach being taken up by seating and vendors. The new Pattaya Mayor has promised to make this one of his first priorities to find a middle of the ground solution.

Poramase Ngampiches, the mayor, stated earlier this week that he was aware of the issues in this area and divisive opinions. He said he understood the perspective of the vendors, many who have struggled for two years to make any profit due to Covid19 restrictions and previous beach closures. He also understands that the seating areas are tremendously popular with visitors to the beach.

However, on the other hand, the intention of the new beach was never to have every square inch of space claimed by vendors, causing people not interested in paying to sit in these areas to be shut out. Additionally, the mayor is aware the popularity of the beach seating has caused tremendous traffic problems in Na Jomtien, an area previously known for peace and quiet, which is annoying local residents.

The mayor plans to reportedly speak with all sides of the issue and propose a solution that will hopefully make nearly all parties happy. However, no specific time frame for this plan has been made.