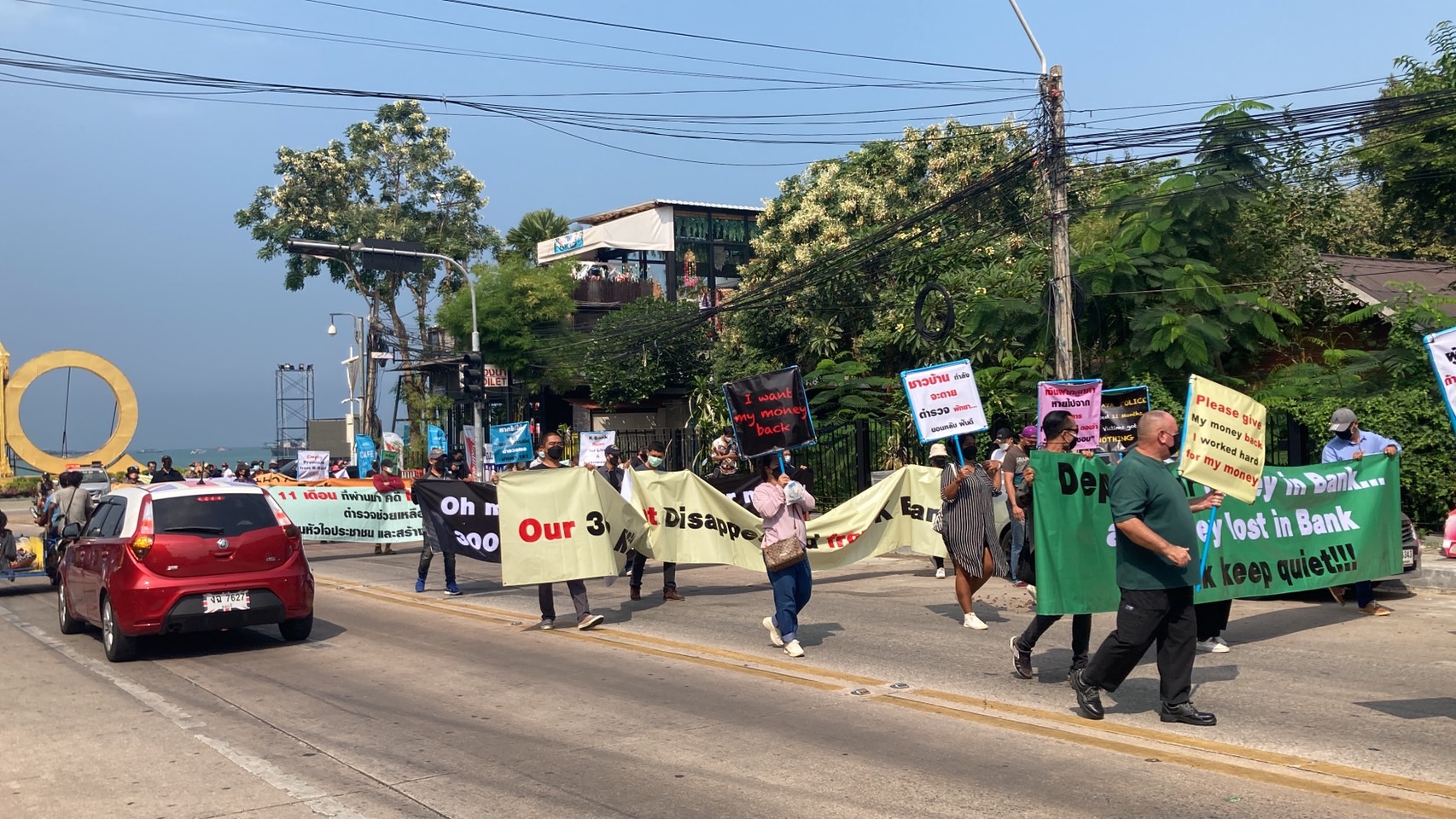 More than 50 foreign and Thai victims gathered in Pattaya on Christmas Eve this past weekend (December 24th) regarding a case of a Pattaya area bank branch assistant manager causing them to lose significant amounts of money due to alleged fraud and scams. 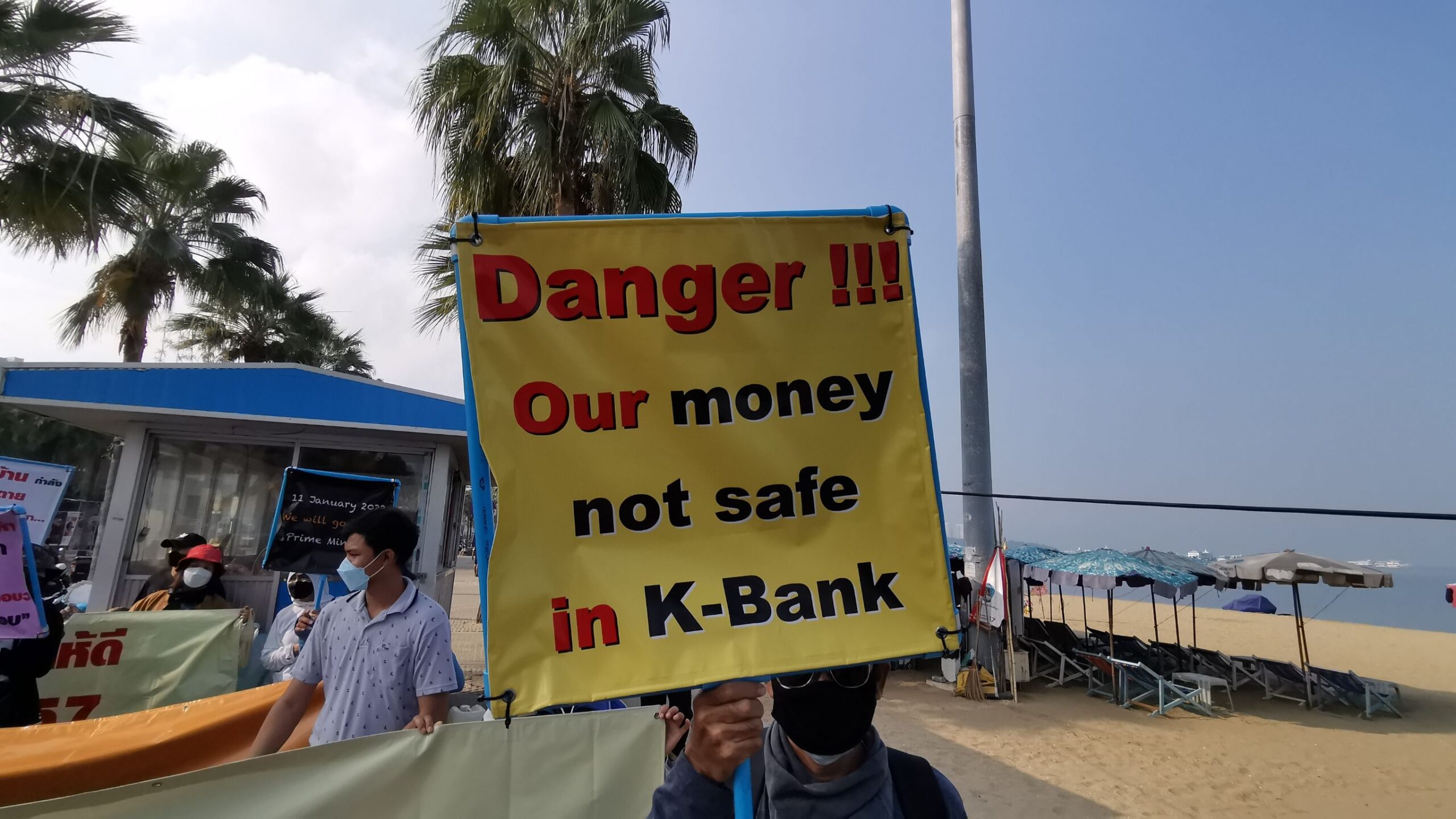 The group peacefully walked along the Pattaya Beach Road from the Pattaya City Police Office to the bank branch located in Central Pattaya. Police were present but did not attempt to break up the group, although officially protests, rallies, and assemblies are currently banned due to Covid-19 rules. 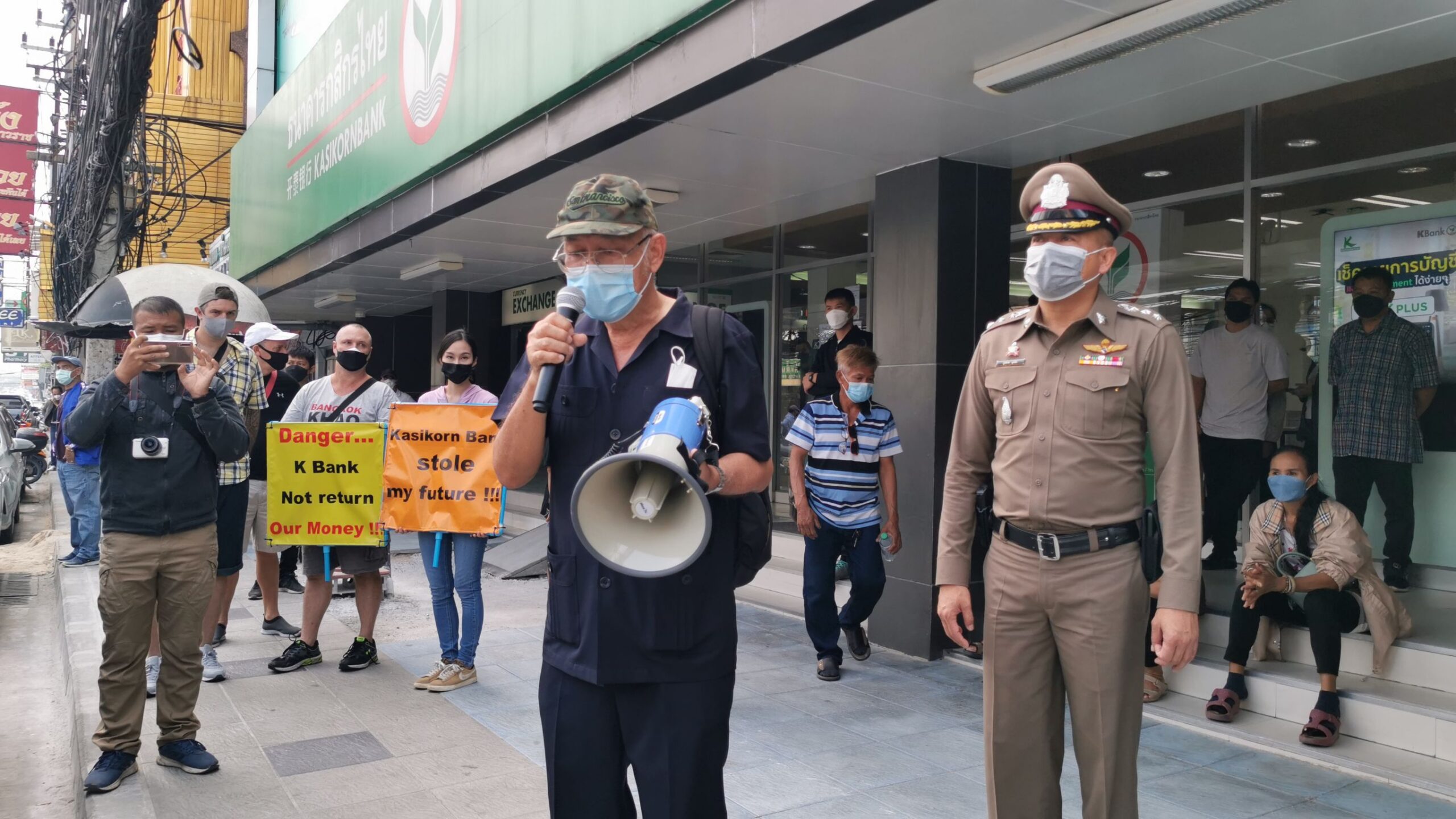 Mr. Sirichai Piyapichetkun, a lawyer for the victims, spoke with TPN reporters and said, “In regards to the protest, we want the public to know about this case. We want to ask the Pattaya City Police chief to change his investigator team for this case as the case still has had no updates for the victims for almost a year now.”

TPN notes that the Pattaya Police Chief is new in his role and had previously met with the group of victims earlier this month (see below) and promised to investigate the situation and connect with senior bank management, the second police chief to do so. The basic situation, according to Mr. Sirichai, is that the bank has allegedly stated they will investigate the situation, but have not kept regular contact with the victims or provided updates and this has been the case for almost a year. Some victims stated that the assistant bank manager took their entire life savings through a variety of scams and fraud. You can read more about this entire situation with our reference articles at the end of this article. 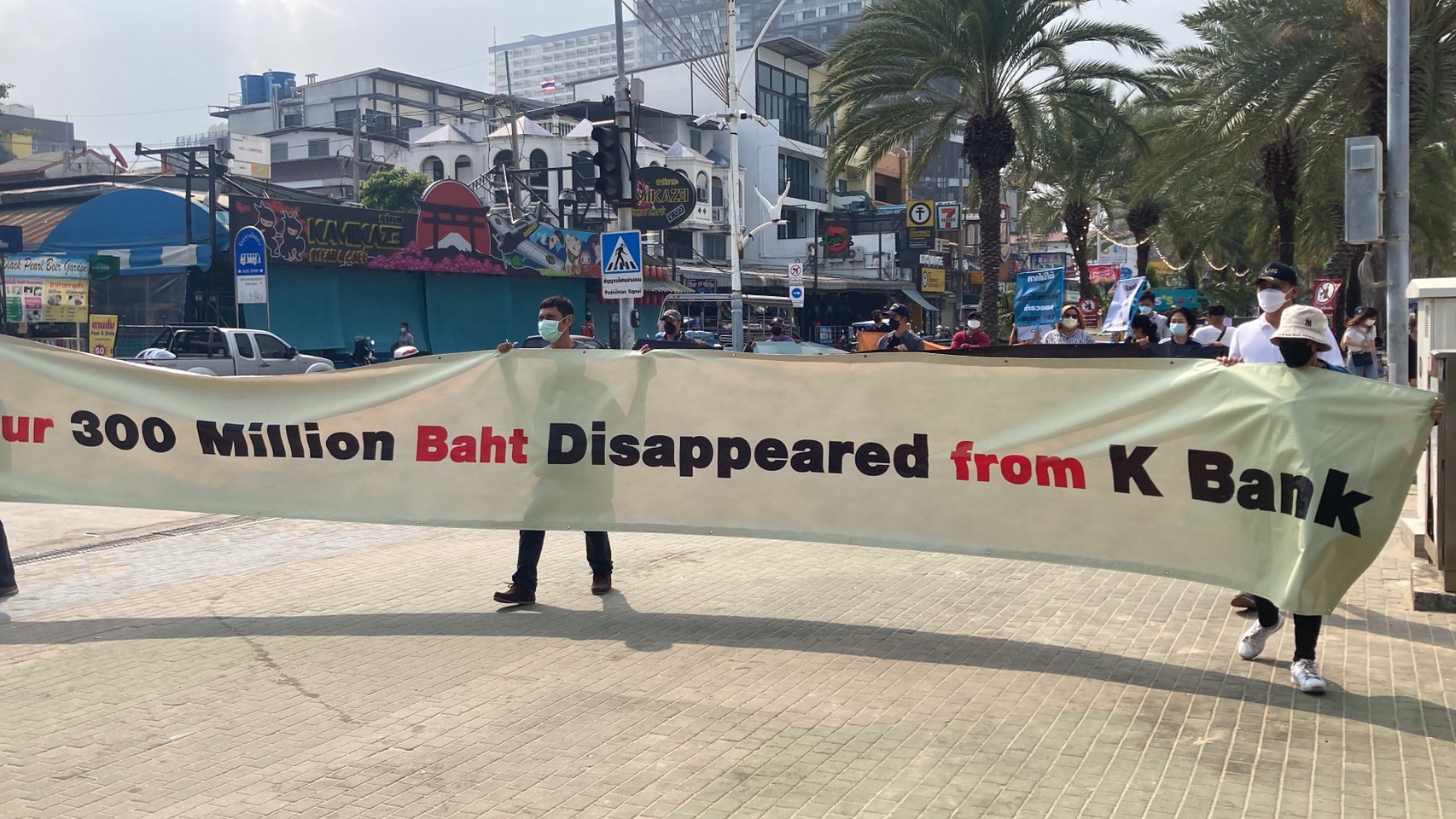 “By January 11th if there was still no update, we will hold another protest in Bangkok and go to the Royal Thai Police main office and the main bank branch. We do not want to cause trouble and disrupt police, we know the Covid-19 rules around protests and Thai laws around libel and slander. We only want the bank to handle this situation and address the problem and these over fifty loyal customers who are now missing their funds.” Sirichai noted.

As of press time, representatives from the bank have not released an official statement, although it is a holiday weekend and Mr. Sirichai stated they would give them until January 11th until further action would be taken. 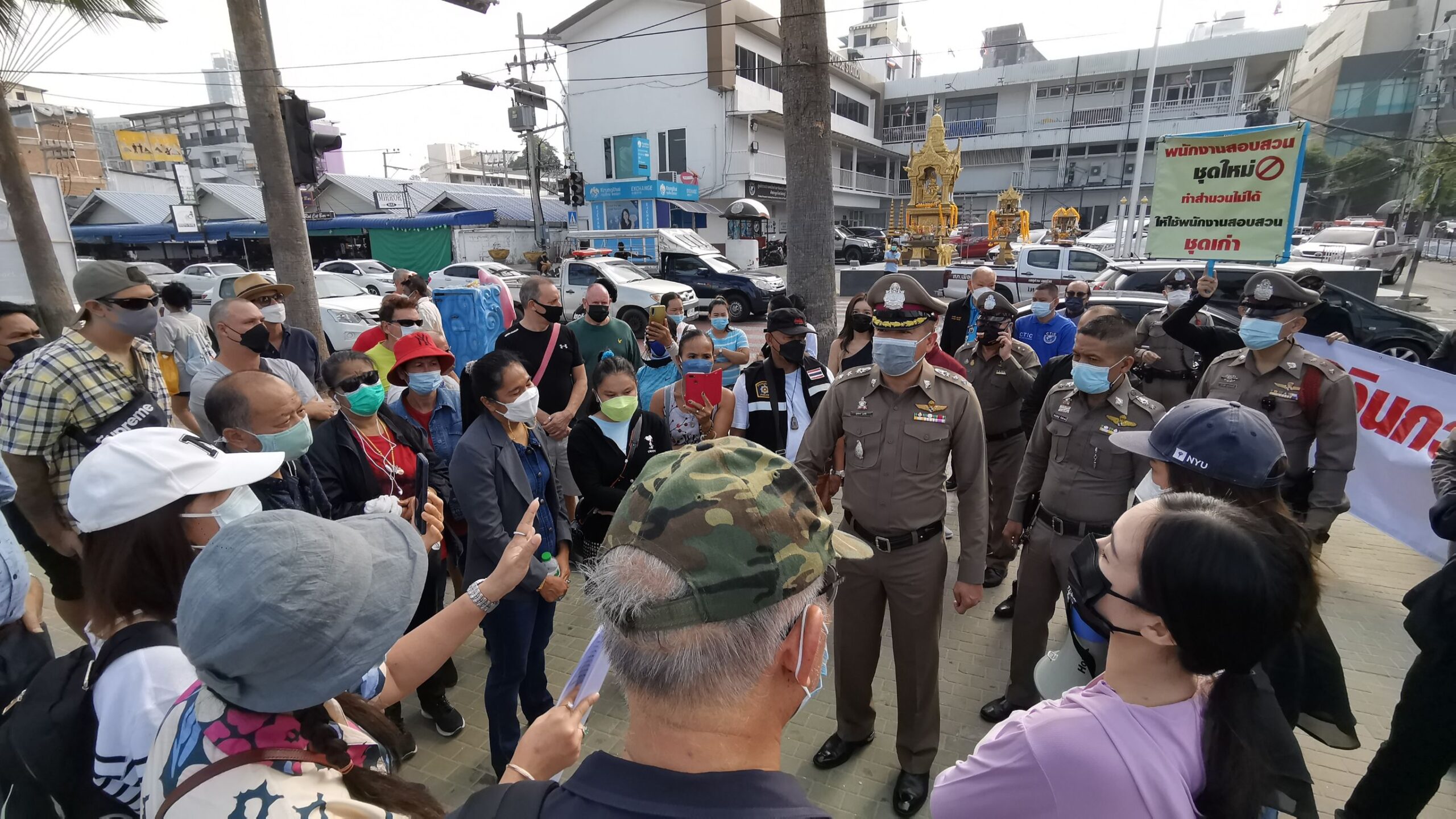 As a reference, the prior story for readers to get caught up on the situation and allegations so far:

More than 20 foreign and Thai victims have followed up at the Pattaya City Police Station regarding the case of a Pattaya area bank branch assistant manager causing them to lose significant amounts of money due to alleged fraud and scams.

Multiple foreigners and their wives in Pattaya have filed reports to Pattaya police accusing a Pattaya area bank branch assistant manager of causing them to lose significant amounts of money due to alleged fraud and scams.