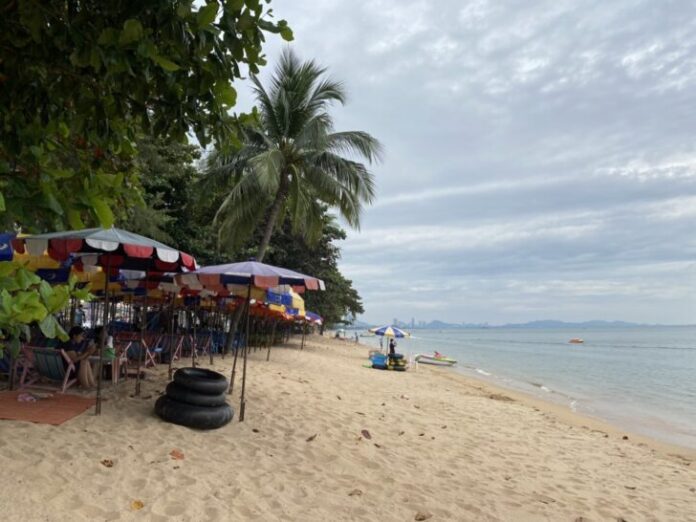 Just like most other tourist attractions in Thailand, the city of Pattaya is still not bustling with tourists as it used to even though it has been 17 days since the country reopened, at least according to the acting president of Chonburi’s tourism council.

Currently, the number of foreign tourists traveling into Thailand is about 1,000-2,000 people per day, Thanet stated, using data from the Thailand Tourism Authority. Of that, tourists entering Pattaya amount to around 200-300 people per day, averaging only 10 percent of total visitors to Thailand or about 6,000-7,000 people per month, unlike the pre-covid period where foreign travelers were recorded in November – March with an average of 1 million people per month. According to Thanet, as expanded below, many of the 200-300 who do come to Pattaya are not tourists but ex-pats, businesspeople, or leave immediately due to lack of entertainment and nightlife. The acting president said: “Although the number of bookings is now higher than during the previous Covid-19 outbreak situation, the number of nights is very small. Normally, for Pattaya, before Covid-19, one booking meant an overnight stay for about 10-14 days but now it’s just 1 booking for 1 night.”

“Hotels are now working 10 percent harder than before but earning less, according to a survey of the booking statistics of tourists from low-risk countries,” Thanet added.

“90 percent of foreigners coming to Pattaya with complete vaccination and a negative RT-PCR test only stay at a hotel long enough to get their first Covid-19 test results as required by current Thai policy currently. After they test negative they immediately check out, with almost all stating they are going to their own homes, condos, or rooms. This shows that most of the foreigners who come in right now are not tourists, but ex-pats or business people who live and work here.” Thanet stated.

Thanet further stated that although Thailand is one of the first countries in Southeast Asia that launched a reopening, the government has implemented rules and limitations that make tourists think that traveling here is still complicated and difficult.

“Compared to other tourism competitive countries, such as Turkey, the Maldives, Sri Lanka, etc., they do not have such requirements as Thailand does. If tourists are fully vaccinated and complete the RT-PCR test 72 hours prior to the flight, they can travel right away once they arrive,” he added. Thanet also suggested that The Thai government should initially start by changing from RT-PCR tests to ATK tests in order to attract more tourists in the country as well as reducing regulations, such as the approval for alcoholic beverages sales at restaurants in Pattaya and reopening the nightlife and entertainment sectors, which he says is a huge turnoff for tourists being closed.

He continued: “Legal alcohol sales should be implemented in all pilot areas of 17 provinces. Many foreigners mostly drink alcohol as part of their meals. Keeping alcohol completely banned, even at restaurants, is a huge turnoff to foreign tourists and has made a lot of media attention both in Thailand and internationally. Some areas, like Krabi or Bangkok, can sell, but others like Pattaya or Chiang Mai, cannot. This only confuses tourists and frustrates business owners, especially when an area is highly vaccinated or there appears to be little reason as to why one area is open and another is not.”

“In the beginning, there may be no need to open entertainment venues but the government should at least allow establishments to sell alcoholic beverages first. But if the situation is better in the future, we also want to open the venues. All major tourism associations of Pattaya have to admit that most foreign tourists come to Pattaya because of the entertainment venues, nightlife, and atmosphere. As long as this sector remains closed, Pattaya will not truly begin to recover and allow thousands of people to return to work. I understand that this sector is not everyone’s cup of tea, but not only does it directly support the majority of tourism for Pattaya it also indirectly helps nearly every other sector by bringing more tourists to Pattaya.”

He also urged the government to look at the overall situation and how they should run the domestic economy as the number of foreign tourists who come in now is still very low and the reopening is not considered successful. Thanet also stated he fully supports all the different groups coming together, such as this one led by Lisa Hamilton and Punnipa Flowers, encouraging the government to reconsider keeping the bar, nightlife, and entertainment sector closed until 2022. Eight major tourism associations have also presented a formal petition to the Thai government to ask for the decision to be reconsidered, especially for Pattaya, over the holiday season in addition to hundreds of local bar owners.