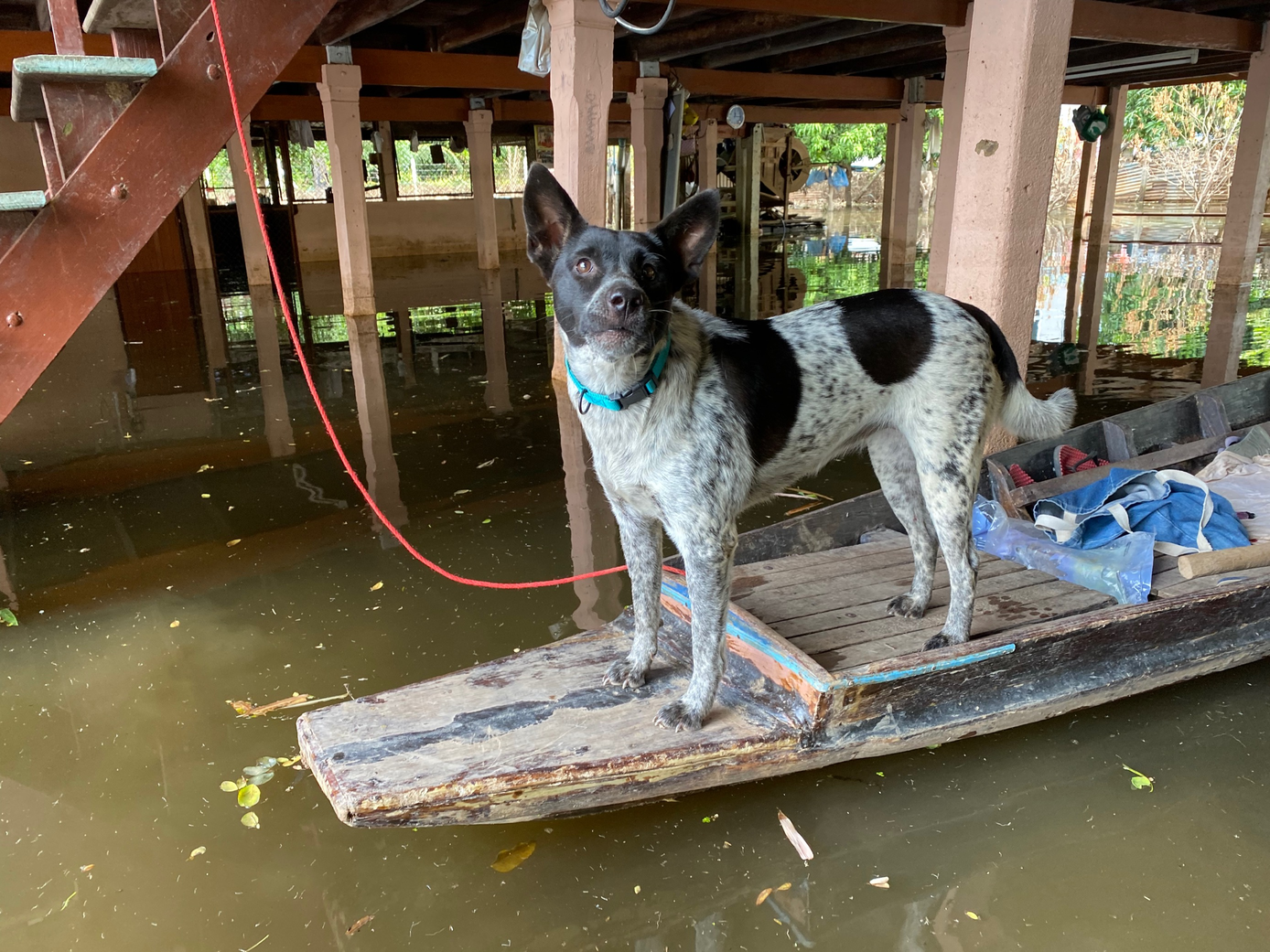 Soi Dog Foundation has this week provided over 40 tons of dog and cat food for 3,000+ animals affected by severe flooding in the central Thai provinces of Ayutthaya and Sing Buri. The food was distributed to stray and domestic animals in five districts: Bang Ban, Sena, Bang Pahan, and Tha Ruea in Ayutthaya, and In Buri in Sing Buri.

“We received reports of dogs and cats suffering as a result of the flooding and came up with a plan to help, with the first priority being those who are starving,” explained Soi Dog Community Relations Manager Sakdapol Thongjan. “2,000 bags of dog food and 230 bags of cat food were supplied to local tambon administration organizations (OrBorTor) in districts affected by the flooding. We are preparing for the event that there are more affected regions and are continuing to work with the relevant local authorities.”

Soi Dog staff had to paddle boats to reach some flooding victims who have been stranded on the upper floors of their houses with little or no access to food for their pets. One such victim in Sing Buri told Soi Dog that his family had received survival supplies from their local OrBorTor but were running out of food for their nine cats who were stranded alongside them in their submerged house.

“We have to blend canned fish with rice each meal so everyone feels full,” he said. “So I’m pleased Soi Dog spotted me. There must be others in the region who are struggling with their pets and have no food.”

Chief Monk Phra Khru Aobprachit Boonyarat, who cares for over 300 dogs and cats at Ta Nod Temple in Ayutthaya, explained that pet food donations were already low on account of the pandemic and that the flooding has reduced them even further.

“The outbreak of Covid-19 has resulted in a significant reduction in donations, and we have encountered issues in caring for our dogs and cats ever since,” he explained. “Topped off with the flooding, we are almost out of food here. Thank you Soi Dog for lending a helping hand in our hour of need.”

Soi Dog Foundation has helped large numbers of animals displaced by flooding over the years, including in Nakhon Si Thammarat last year, in Ubon Ratchathani in 2019, and in Bangkok between 2011 and 2012. In addition to donating food, the foundation has also provided assistance in the form of sterilization, vaccination, and the reunion of lost animals with their owners.

With floodwaters persisting and further rain forecast, the foundation has launched an emergency appeal and is requesting public assistance to ensure they have the resources to continue caring for displaced animals.

“Any support, whether from an individual or an organization, is greatly appreciated in these uncertain times. These animals are part of our communities, and they need us now more than ever,” Sakdapol emphasized.

To report a misplaced dog or cat in need of food, please call 076-681029 (Monday-Friday, 08:00-17:00) or email ble@soidog.org. To donate to Soi Dog’s urgent appeal fund to help thousands of animals affected by flooding, please visit www.soidog.org/content/urgent-appeal/singburifloods.

The preceding was a press release by the Soi Dog Foundation. Their statements and opinions are entirely their own.