Three people have been pronounced dead at the scene after a pickup truck crashed into a municipal highway truck that was conducting construction work, painting traffic lanes on the motorway.

The Si Racha Police was notified of the accident on Sunday night near midnight (July 11th) on Motorway 7 Section 2 in Bang Phra.

Emergency responders and associated local Thai media arrived at the scene to find a severely damaged white pickup truck impacted into the back of a highway construction truck on the motorway.

Rescue workers found the body of a highway worker, Mr. Anuchit Jitrak, 24, from Ubon Ratchathani, lying in the middle of the motorway.

Two people were found dead inside the pickup truck who were named by law enforcement as Mr. Winai Leedee, 30, and Ms. Ampa Jantanee, 33.

It took about 15 minutes for rescue workers to free their bodies from the heavily damaged pickup truck that had been nearly completely totaled by the accident as you can see in the below picture. 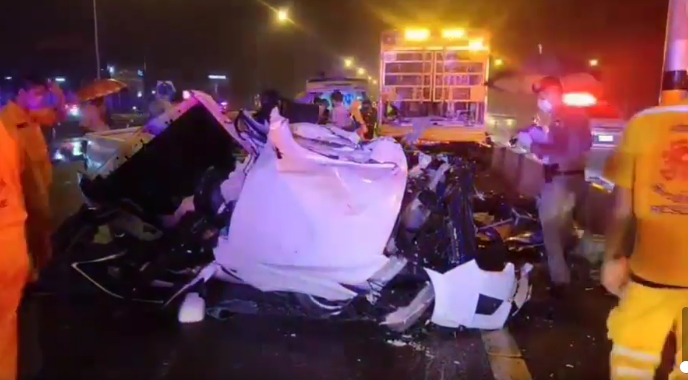 A highway construction worker, Mr. Samai Joongpan, 46, who had escaped from injuries told Si Racha police at the scene, “We were working on drawing traffic lanes on the road when it began to rain heavily.”

“Warning lights and signs, including bright yellow lights on our truck, were in place to warn road users. However, this could have been obscured somewhat due to the heavy rain at the time of the accident.” Samai stated.

“We were collecting equipment when the pickup truck, driven by Mr. Winai at high speed on the wet road, crashed into our construction truck and two of our staff.  One, Anuchit, died instantly, while the other employee suffered several injuries and was taken to a local hospital. I was waiting by the cab of the construction truck and was not injured.” Samai concluded.

Police are reviewing motorway CCTV to determine the exact sequence of events but early police statements seem to agree with those made by Mr. Samai. The name of the injured construction worker was not immediately released by Si Racha police.