Chiang Mai was ranked the most air-polluted city in the world for three consecutive days by iqair.com as of this morning, March 9th, with an average PM2.5 dust level higher than 200 µg/m3.

Nearly 10,000 people with underlying respiratory conditions and allergies who are living in the northern province of Thailand have reportedly been visiting local hospitals due to their inflammation relapse caused by the critical level of air pollution in the municipal area, according to Chiang Mai authorities.

According to iqair.com, the level of PM.2.5 dust particles in downtown Chiang Mai had reached 247 µg/m3 as of 10:00 AM. while the levels of air pollution in the other four monitoring stations are still affecting health as its level was recorded between 90 to 113 µg/m3. 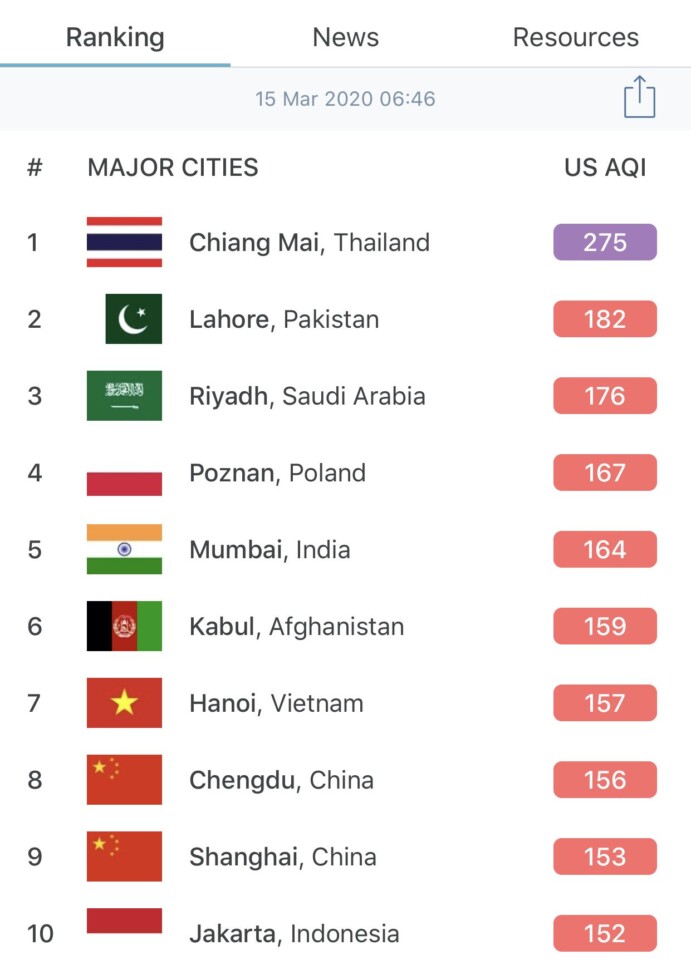 The Northern Meteorological Center reported that the concerning pollution problems in Chiang Mai and nearby northern regions have not yet been resolved due to the low pressure associated with dry weather and heat, obstructing the smog to be ventilated.

The Occupational Health and Environmental Disease Control and the Chiang Mai Provincial Public Health Office reported that a total of 9,234 patients in the province were suffering from respiratory disease, cardiovascular disease, eye and skin inflammation caused by the air pollution from February 1st to March 5th.

People are advised to refrain from outdoor activities and protect themselves by wearing masks in order to prevent the exceeding inhalation of dust particles and pollution.

The Pattaya News notes that not one, but two bans against burning are in place in the province, yet the practice continues and appears to be largely ignored as farmers and others burn crops in the region which happens annually.  Residents of Chiang Mai have called upon the government to take greater action and control the situation, claiming that the “ban” is not enforced or that many farmers simply burn at night when it is more difficult to catch them.