The Chonburi Public Health Office today (March 5th) has announced one new confirmed case of Covid – 19 in Chonburi which is a Chinese national who lives in Banglamung. Chonburi now has a total of 657 cases of Covid-19. 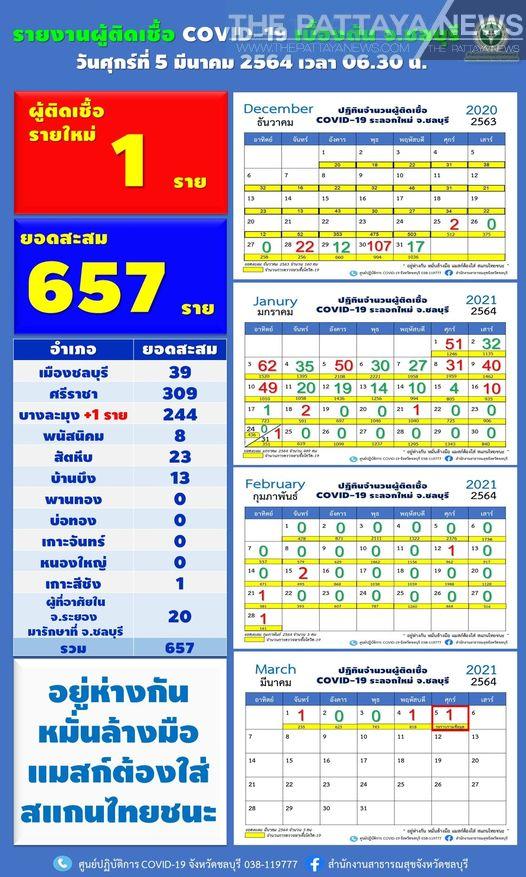 The Chinese patient, whose age and gender were not given, had entered Thailand early last year (2020). The patient previously operated a restaurant and a bar in Pattaya. However, those businesses were temporarily closed after the new year when the second round of infections of Covid-19 in Chonburi caused the government to implement new restrictions and are currently not open, even though the restrictions have since been lifted.

According to a report from the Chonburi Department of Public Health, the patient went to Bangkok from February 24th to February 26th. The patient called a GRAB driver and went to a department store four times while in Bangkok, although reportedly wore a mask.

The patient went to a hospital this week reporting a persistent 10-day cough and two days of having a stuffy nose. The patient is a chain smoker, according to the Chonburi Department of Public Health. The patient has been isolated at a hospital after being confirmed of having Covid-19 and doctors are reviewing their close contacts, which are very limited.

The patient has been in Pattaya since February 26th and rarely left their own, the report continued. The patient has only gone to a convenience store nearby once for about five minutes and wore a face mask all the time and ordered food delivery.

It is still being investigated by contact tracers based on the patient’s limited travel and social history where they could have got the Covid-19 virus from.

This is the second case of a foreign national having Covid-19 in Chonburi in the past two days, the Chonburi Public Health Office yesterday (March 4th) announced one new confirmed case of Covid – 19 in Chonburi which was a 78-year-old Swiss national in Banglamung.