The Center for Covid-19 Situation Administration, or CCSA, announced a Hungarian man as a new case of domestic transmission in Bangkok today (November 10th).

The one new case of a domestic transmission is a Hungarian national, 53, who is a diplomat living in Bangkok.

The CCSA reported that the man had contact with a previous confirmed case on November 3rd. The previous case was a Hungarian Minister on a diplomatic mission who was tested on arrival and sent back to Hungary.

The Public Health Department reported this afternoon that the Hungarian diplomat had contact with the Hungarian Minister who is a previous confirmed case. The diplomat met the minister by private car at the airport to take him to alternative state quarantine, where they also shared lunch. They did not go to any public areas and were not exposed to the general public, according to the Public Health Department. The diplomat is completely asymptomatic.

However, the Hungarian diplomat was being home quarantined since he was notified that the Hungarian Minister tested positive with Covid – 19. He did not have exposure to the general public, according to the Ministry of Public Health. 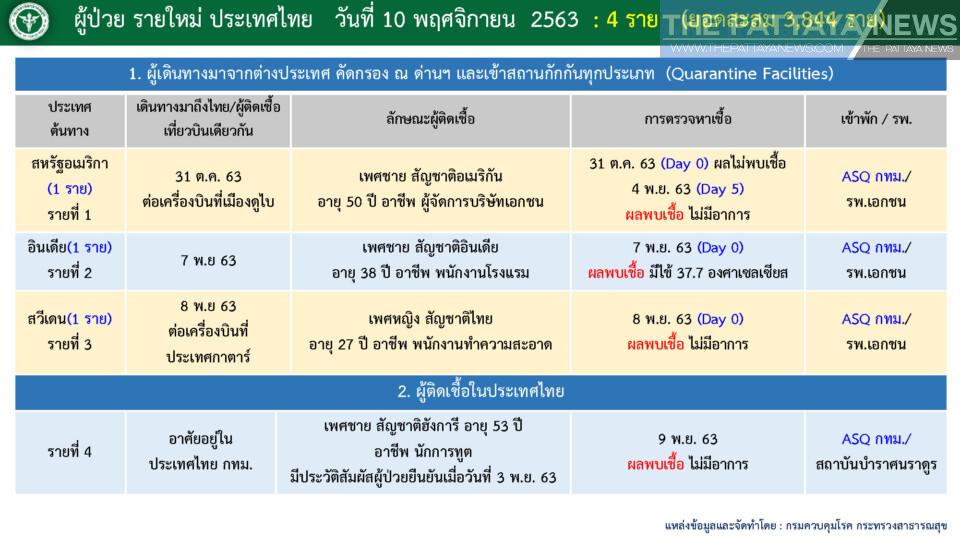 An Indian man, 37, who lives on Phi Phi Island in Krabi and is another new recorded local transmission of the COVID – 19 virus in Thailand, had visited Phuket, Chiang Mai and Sukhothai in the past few weeks. Hundreds of people connected to him have so far tested negative for the virus.