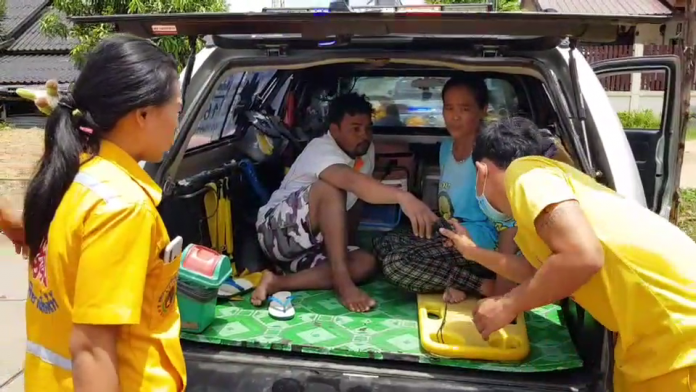 A Cambodian man miraculously survived with nearly no injuries after being hit by a lightning strike in Si Racha yesterday.

Emergency responders were notified of the incident yesterday afternoon at a construction worker’s camp in Nong Kham.

They arrived at the scene to find a very slightly injured man who goes only by his first name, Mr. Sun, 35 years old.

Sun, who seemed calm despite the situation, said at about noon there was a thunderstorm with heavy rain, causing him to go back to his temporary shelter of a home.

When Sun opened the door again as the rain began to let up, he was knocked unconscious for about five minutes. He does not remember the actual lightning strike. Sun said he felt numb on his hands but otherwise seemed to be in good health overall.

His colleagues said Mr. Sun was hit by a lightning strike which also caused the electric at the camp to temporarily shut off. It was a miracle that he survived, both rescue workers and his colleagues agreed.

Mr. Sun agreed to go to a local hospital for a precautionary checkup although he said he felt fine.