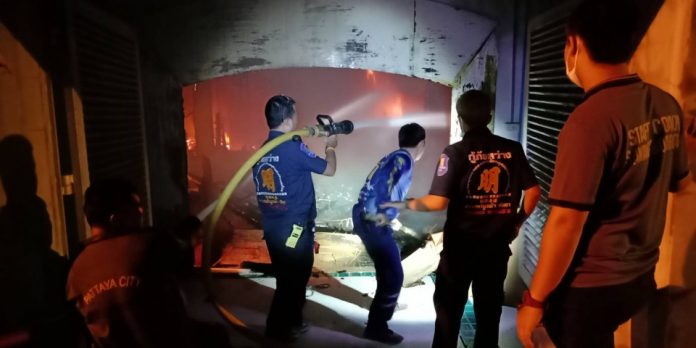 A fire raged through the Sukhawadee House in Pattaya yesterday morning on the first day it re-opened in almost four months due to the Covid19 Coronavirus crisis.

Here is a video taken by our team of the fire:

The fire started again inside the building caused by low burning embers in the foundation area and after wind sparked up a fire.

It took many hours to control the fire and firefighters fought the fire in the foundation of the building throughout the night.

A fire fighter Mr. Kritsana Laocahrt, told The Pattaya News that yesterday when the fire was under control they had a small team on standby at the building. They kept spraying water at the building for a total period of fifteen hours to fight the fire.

Initial damages of the fire are at 200 million baht. The structure additionally suffered severe damage and parts of the building are in danger of collapsing, say fire inspectors and officials.

The cause of the fire is still under investigation. Sukhawadee House had been in a long standing legal dispute with Chonburi and Pattaya City officials over alleged use of public land by some of their buildings prior to the incident.