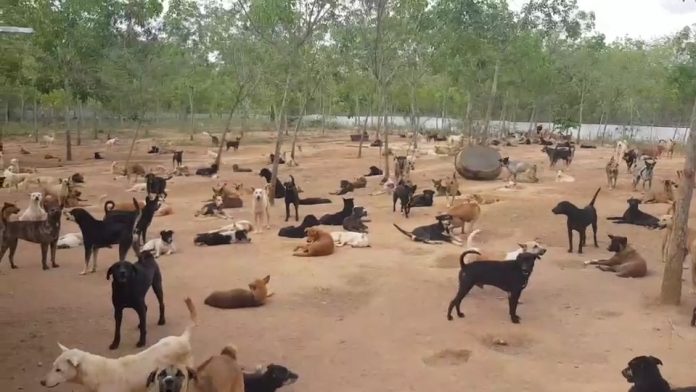 Chonburi-
Chonburi Area Officials, including the Vice Governor, inspected a makeshift dog shelter in Pong late this afternoon after local complaints of starving and sick abandoned dogs in Chonburi.

The Hope Thailand Organisation has helped more than 600 street dogs who are living in the shelter in the Pattaya area this week. The dogs had been rounded up in the streets previously around Pattaya.

“The Chonburi Vice Governor Thammasak Rattanatanya told The Pattaya News, “The foundation that usually takes care of these street dogs has just moved from Plu Taluang in Sattahip to Bang Lamung two months ago.”

“So they might not be 100 percent ready to take care of all the dogs. We are working with additional local animal welfare organisations to assist with the foundation.” He added.

“The Chonburi Livestock Association and City Veterinarian will also help take care of the sick dogs.” He continued.

It has been reported that Pattaya City has given their emergency budget for these dogs of 300,000 baht as well to deal with the immediate pressing issues.