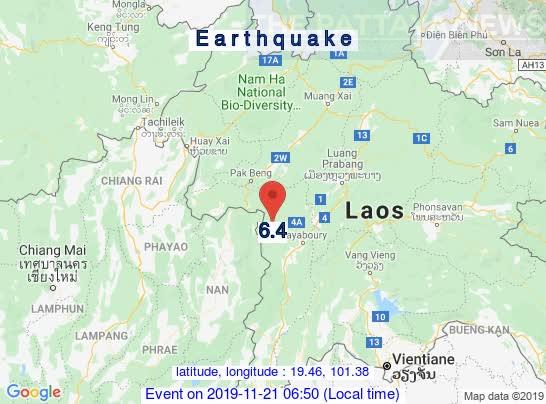 BANGKOK (NNT) – A 5.9 magnitude earthquake hit Laos at 4:03 a.m. this morning, followed by several after-shocks and a 6.4 magnitude earthquake at 6:50 a.m. The epicenter of the quake was 19 kilometers away from Khun Nan subdistrict in Nan province, while the tremor was felt in the north and northeastern provinces of Thailand, as well as in tall buildings in Bangkok.

The Meteorological Department and the Department of Mineral Resources have announced the earthquake occurred at a faultline in Laos which is connected to the Pua fault in Thailand. In the past a similar earthquake of 6.5 magnitude in the same area, occurred on 13th May 1935.

The Meteorological Department’s (TMD) Director General Group Capt Somsak Khaosuwan said today the 6.4 magnitude quake at 6:50 a.m. this morning was the main shock, and there will be smaller aftershocks occurring for about a month as the tectonic plates release their power.

On the tremor which could be felt in tall buildings in Bangkok, the TMD chief explained that the soft soil in Bangkok enables vibrations to be felt even from far away, however the general public shouldn’t panic as the department’s earthquake observation division is always closely monitoring the situation. He also said should there be an earthquake in Thailand, the quake will be smaller than 7 magnitude, and is likely to have its epicenter around the Mae Chan fault.

The Ministry of Foreign Affairs has received updates from the Royal Thai Embassy in Vientiane, which has reached out to Thai communities in Laos after the incident. The report says the power plant in Hong Sa received some damage, including to the workers’ housing. There has however, been no report so far regarding any injuries among Thai people in Laos.

The tremor was reportedly felt at Xayaburi Hydroelectric Dam and in Luang Prabang, however there has been no damage or reports of injuries.