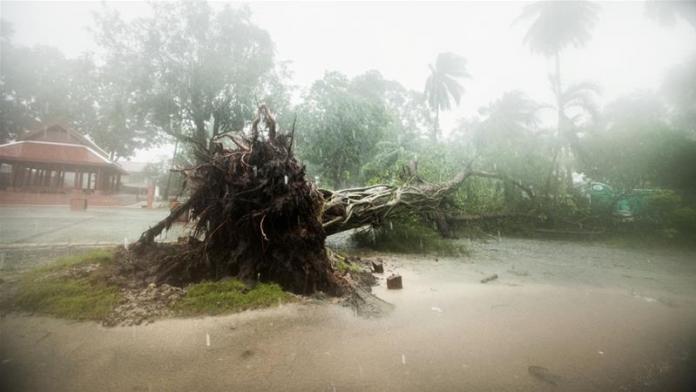 Thailand’s first tropical storm in three decades has killed one person as it arrived on the south coast, knocking down trees and blowing off roofs in its path, but was losing speed, officials said.

Accompanying winds churned up high waves and gusts in the Gulf of Thailand as tropical storm Pabuk made landfall on Friday in the Pak Phanang district of Nakhon Si Thammarat province.

Trees crashed down on houses to cause widespread damage as officials warned against the risk of flash floods.

Disaster mitigation officials said the person killed was among the crew of a fishing boat that capsized in strong winds near the coast of nearby Pattani province. Another of the crew was missing, but four others were safe.

Weather officials warned of torrential downpours and strong winds in 15 provinces in the Thai south, home to one of the world’s largest natural rubber plantations and several islands thronged by tourists.

But by Friday afternoon, the storm was slowing and was heading for the province of Surat Thani, the Thai Meteorological Department said in a statement.

“It is expected to downgrade to be a tropical depression,” it added. “People should beware of the severe conditions that cause forest runoffs and flash floods.”

Al Jazeera’s Florence Looi, reporting from the island of Koh Samui on Friday noon, said the effects of the storm could be seen and felt in the holiday destination.
“The waves are much more powerful than normal, they are reaching up to three meters and are coming much further inland,” she added. 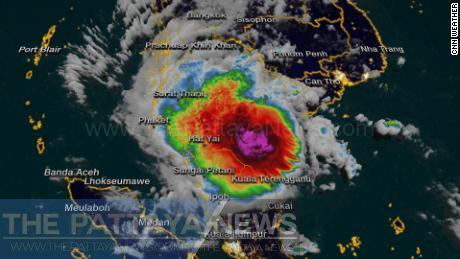 Over the past few days, 6,176 people were evacuated to shelters from Nakhon Si Thammarat as well as the provinces of Pattani, Songkhla, and Yala, the Department of Disaster Prevention and Mitigation has said.

Pabuk has been described as “unusual” because it is “taking place outside of the monsoon season for this part of the world”, noting that the last time something like this happened in Thailand was three decades ago.

The Nakhon Si Thammarat airport said it had closed, and low-cost Nok Airlines Pcl said it had canceled all eight flights to and from the province. 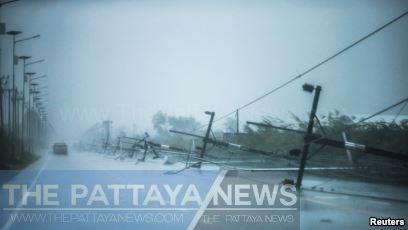 The Surat Thani airport also closed from Friday afternoon to Saturday, canceling flights by Nok Airlines, Lion Air, and Thai Smile, a subsidiary of national carrier Thai Airways.
Earlier, Bangkok Airways Pcl said it had canceled all flights to and from the holiday destination of Koh Samui, where ferry services have also been suspended.

National energy company PTT Exploration and Production Pcl said it had suspended operations at Bongkot and Erawan, two of the country’s biggest gas fields in the Gulf of Thailand.