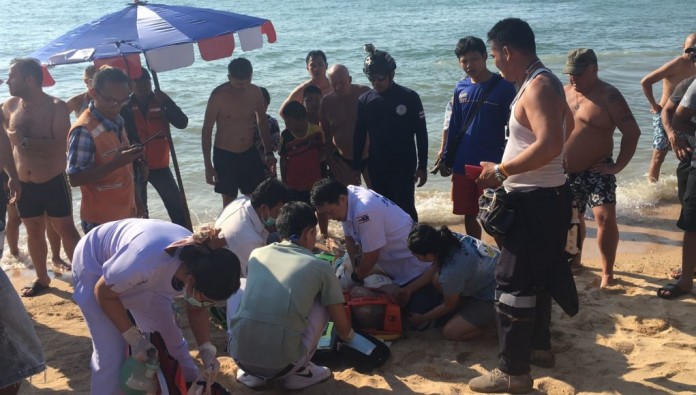 An Austrian man has died after drowning on Pattaya beach.

The 64 year old man was pulled from the water opposite Soi 10 on Pattaya Beach Road at around 4.30pm on Tuesday 20th March. He did not have identification on him and was swimming alone and police are working on identifying him.

Witnesses told police the man was rescued by other swimmers after he was spotted floating in the water and had been swimming out in deep water alone when he ran into trouble.

Rescue workers from Sawang Boriboon Foundation gave the man CPR and was transferred to Pattaya Memorial Hospital but was later pronounced dead.

Last month a Russian man drowned on Pattaya beach, prompting calls from members of the public for lifeguards to be posted on the beach. Additionally, a man nearly drowned a few days prior but a police officer managed to revive him after CPR.

People commenting on social media suggested that a resort as popular as Pattaya should have lifeguards in place to help ensure the safety for anyone visiting the beach. This was also brought up previously on the two prior incidents. Pattaya did have lifeguard booths several years ago however they were not used and ended up falling into disrepair and were dismantled. There are covered lifeguard stations, however only in two locations and not in clear view of the sea, nor are the lifeguards watching the ocean.

Be safe out there.