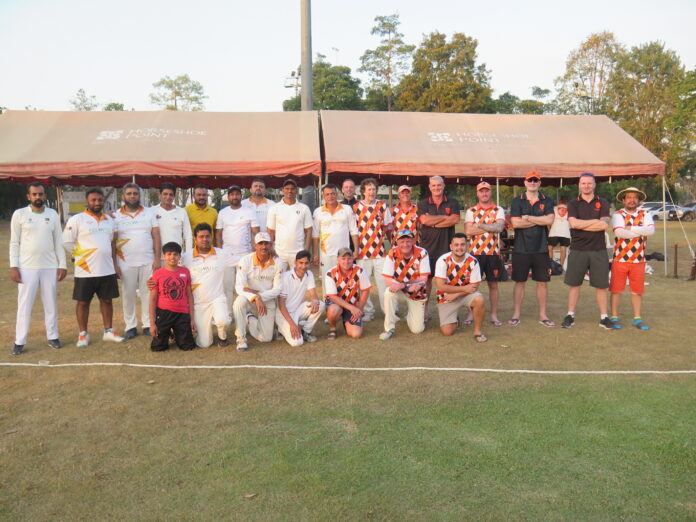 The start to PCC and ASCC’s Bangkok Cricket League season has been delayed by the late completion of the refurbished wicket at Horse Shoe Point.  I could write a book about why and how, but I’m not going to.  Needless to say, the friendly between the two arch-rivals was an opportunity to try out new players and see how the wicket played. As always, some players were not available and PCC was missing Habby Singh, Tom Fogden, and Jainish Parikh, all quality bowlers.

The match was played on Sunday the 22nd of January in bright sunshine and a light breeze.  Standard MCC limited over Laws applied with BCL playing conditions and an additional ruling about the tree in the field of play, that being, a 4 for hitting the tree.

Captain Wezley Masterton won the toss and decided to bowl, which suited ASCC as Captain Dimple wanted to bat first.  Manoj and Hardik took the crease and Ryan Driver bowled the first over downhill.  The new ball was swinging and Ryan was keeping things tight with only 2 off the over. Wez bowled next but had all sorts of problems controlling the swinging ball and wobblyitis of his bowling arm led to 8 wides and 6 runs off the willow, but the final ball was a corker and removed Manoj’s off stump from the rather soft plasticine.  16 for 1 off 2 overs was an expensive start, but an early wicket is always worth having. Ryan continued to be very economical and Andy Emery took over from Wez.

Dimple was batsman No 3 and steadily added runs off Andy and Mark Johnson as did Hardik and the score trotted along at about 6 runs an over.  Dimple was doing well with 22 from 14 balls when he slashed at a short ball from Andy’s 3rd over and was caught behind by Harrison the new keeper.  49 for 2 from 8 overs. A plethora of bowlers followed; Mark Johnson, Hansie, El Chapo, and Wez all going for double figures per over. El Chapo seemed to have forgotten much about the Laws of cricket and found it hard to understand the umpire’s decisions or why the nasty batsmen were bashing him around HSP.  Lots of expletives followed – very uncricket-like old chap.

The 100 was reached in 14 overs and after another wobbly over from Wez with 5 wides, drinks were taken. Steve Christie (Crunch) with his quickish left-arm spin was brought into the attack, whilst Mark continued to be assaulted, but not without success. A slower ball induced Hardik to sky a ball high to mid-off and into Ryan’s very safe hands.  Hardik went for a creditable 68. Mark finished with 4 overs, 50 for 1.  139 for 3 from 17 overs and a score of 225 looked on the cards.  Darmesh led a charmed life when having received a No Ball he skied the free hit and was dropped and latterly bowled on another  Lakha was batsman No 5 and scored quickly from Mark, Andy and Crunch before Andy stepped for his final over and despite being hit for 12 runs, he bowled Darmesh for 38 which included 5 6’s. 189 for 4.

Crunch had been hit for 20 off his 3rd over and was looking for revenge which he got when he bowled Lakha for 25 from 15 balls. 197 for 5. Ryan returned to the attack and made short work of Roni who went for 3 which meant Sam took the last few overs with Imran.  Imran finished 9 not out whilst Sam blasted 20 from 9 balls, 16 of which came from Ryan’s last 2 overs.  Asian Stars finished on 226 for 6 from 25 overs.  PCC best bowlers were Ryan with 5 overs 1 for 25 and Andy with 5 overs 2 for 39.  PCC gave away an embarrassing number of extras (41), 25 of which were wide, mainly from Wez.

After the break PCC sent Wez and Luke Stokes to open against the bowling of Dimple and Manoj.  Wez went into normal mode which does not include running unless absolutely necessary and he rudely refused to share the strike with Luke. Both Dimple and Manoj’s bowling figures suffered accordingly with Dimple on 47 for 0 from 5 overs and Manoj on 71 for 1 from 5 overs.  Imran and Saqlain took over the bowling. Luke was the first to depart in the 6th over on 11 when Imran induced an edge which Roni caught behind.  62 for 1 and a good start.  Wez continued in the same vain and even broke his bat. In the 10th over Saqlain knocked over Wez’s stumps for a 33 ball 65 which included four 4’s and seven 6’s.

This brought Trevor Moolman to the crease, and he and Ryan held a massive 115 partnership.  They didn’t score quite as quickly as ASCC but they had a head start from Wez’s efforts. Dimple and Hardik resumed the attack and kept things tidy at 6 runs per over, with Hardik being very economical – 5 overs 26 for 0.  The 100 was passed in the 11th over and drinks were taken on the 15th with a score on 130.  PCC was 17 ahead at this stage. Ryan and Trevor continued alternating singles and boundary 4s, with Trevor looking very composed.

The time in the nets at The Outback was proving useful. It was not until the 22nd over that the ASCC managed a breakthrough when Ryan was bowled by Manoj (Bharat) for 50 from 50 balls including four 4s and two 6s. 198 for 3 with two over remaining. The comparative scores were almost equal at this point with the ASCC having the slimmest of advantages. For a short interlude, the Comedy Club arrived.  Someone had told the ground staff we’d be finished by 4 pm, so at 5 pm some of the sprinklers came on. There were fielders pushing the sprinklers back down their holes to stop them and they’d pop back up again until someone turned off the stop-cock.  It was like an adult game of whack-a-mole.

Anyway, Harrison took the crease and only lasted 2 balls before he got a top edge and was caught for a duck.  199 for 4.  Andy Emery joined the fray and made a brief 7 off 4 balls before Imran bowled him and 206 for 5.  Simon Philbrook suffered the ignominy of walking out, hearing the clatter of the woodwork from the first ball, and walking back for a Golden. Imran was on a hat trick. Cometh the hour, cometh the man, cometh Crunch. A single off Imran’s last ball and 21 were needed for a win.  Manoj bowled the last over.  Crunch hit a 6, another 6, a 4, a dot, and a 1. Trevor needed a 4 off the last ball. Out it went in a big parabolic arc to the long-on boundary and stopped 5-10 cm short with Hardik in hot pursuit. Hardik dived on the ball and here things got difficult.  The spectators all shouted and signaled a 4 because they believed Hardick had placed a hand over the boundary whilst holding the ball in the other hand.  Hardick threw the ball back.

Meanwhile Trevor had run 2 and Crunch couldn’t make the 3rd.  I, as the umpire, and in the spirit of the friendly decided to call the game a draw.  ASCC’s best bowler was Imran with 5 overs 3 for 39.  There was no Man of the Match award, but if there was, I would have given it to Trevor Moolman because Wezley hits 65s all day every day and this was a monumental effort from Trevor.