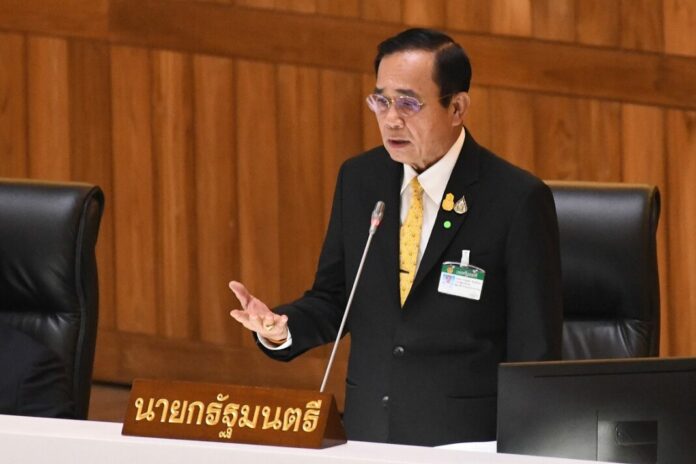 After weeks of the Thai Constitutional Court mulling behind the scenes over a challenge by opposition politicians to Thai Prime Minister Prayut Chan-O-Cha about his legal term limit, D-Day has arrived.

TPN media has written extensively on this matter and won’t rehash the entire saga but if you want to get caught up please click here.

In short, Prayut Chan-O-Cha was suspended from his duties as Prime Minister on August 24th by the Thai Constitutional Court pending their legal decision on the matter of his term limit. He remained active, however, as Defense Minister.

The opposition believes that Prayut has reached the constitutional term limit of eight years, having taken over power in 2014 after leading a military coup.

The sitting government, however, believes that the current constitution was only ratified in 2017 and made official in terms of Prayut’s role, thus in their opinion they believe Prayut has not reached eight years in power.

The Constitutional Court has spent the past five weeks making their decision and the public and Prayut will hear this decision tomorrow, September 30th, at 3PM. Prayut will not attend the hearing in person for security reasons although his legal team will, and will hear the verdict from his residence in a secure military base.

Meanwhile, many activist and pro-democracy protest groups have made plans to gather around Bangkok to await the decision, warning that if Prayut is not ousted from office they will hold rallies, marches, and other protests. Bangkok residents should prepare for the possibility of traffic delays and disruptions.

The Thai government has said many extra police will be called in and areas such as the Constitutional Court have been deemed off limits for gatherings, with officials warning that technically the emergency decree, which ends October 1st, in place since March of 2020 to fight Covid-19, is still in place tomorrow for the last day and bans protests and mass gatherings with significant penalities.

TPN will report the verdict live tomorrow at 3PM and the aftermath from whatever the decision may be.