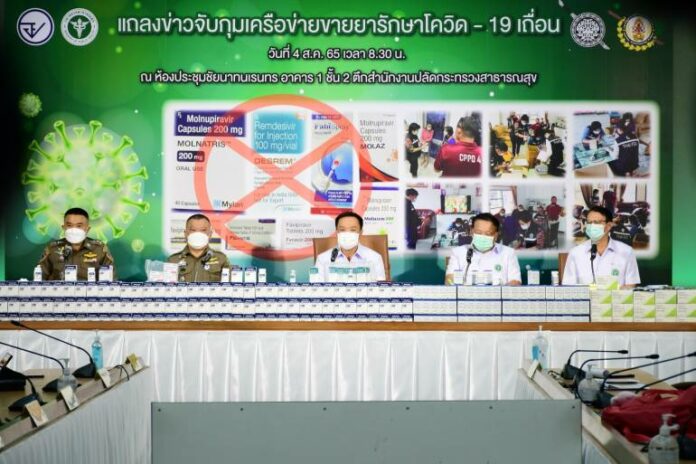 The Ministry of Public Health and the Consumer Protection Police Division (CPPD) on Thursday, August 4th, announced the arrest of alleged illegal Covid-19 drug sellers, confiscating a total of 80,000 tablets which were worth more than 10 million baht in value.

Public Health Minister Anutin Charnvirakul stated during a press conference this morning that the Ministry had coordinated with the Food and Drug Administration (FDA) and the CPPD to conduct the investigation of illegal Molnupiravir online sales. It was found that the drugs, including Remdesivir, Favipiravir, and nitric oxide nasal spray (NONS), were smuggled by unauthorized suppliers without going through the legal process of the FDA. The smuggled drugs were not registered and their quality, efficacy, and safety were underqualified, according to the Public Health standard. Three suspects, who were reportedly all Thai nationals, were arrested at houses in the Lad Prao and Ratchapruek areas of Bangkok with 2,300 boxes of illegal drugs. According to the initial investigation, the drugs were smuggled from India to Thailand. Most of them were through the Chaengwattana customs office and some were carried by the suspects themselves. They were reportedly smuggling for about two years. Anutin stated: “The public shouldn’t buy Covid-19 medicines by themselves online. Molnupiravir and Favipiravir are still considered controlled drugs at the moment and are registered for emergency use only. The medicines should only be prescribed by a doctor.”

“These seized drugs would be examined if they were counterfeit drugs or not. But it was certain that they were illegal, unregistered, and unauthorized drugs.”