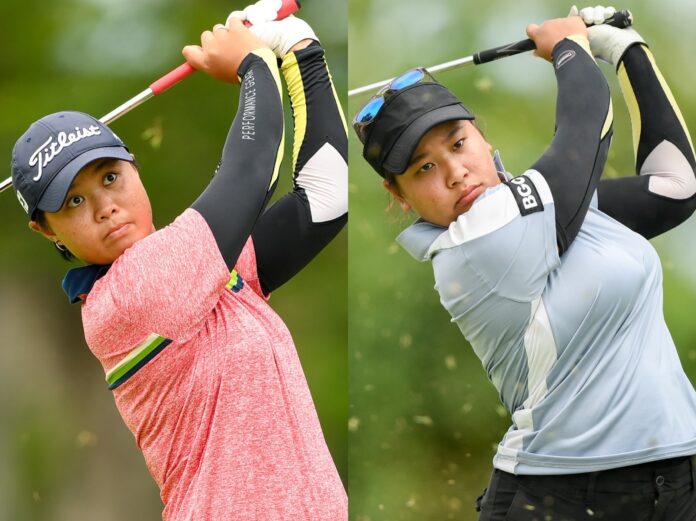 Red-hot Chanettee Wannasaen and Samaporn Phangkhun shared the clubhouse lead at nine-under in the rain delayed Bt 2.5 million SAT-TWT Open Road to World Ranking at the Phoenix Gold Golf and Country Club in Pattaya on Thursday.

Persistent rain forced the second round to start four hours behind schedule with more than 30 players having to finish their actions on Friday’s morning.

Chanettee, winner of the second circuit here at the Phoenix Gold last year, recovered from two bogeys on the front nine (she started at the back) to shoot a 68 and a total nine-under-par-135.

“I didn’t play as well as I did in the first round. I should have sunken more putts. But nine under-par is not a bad score in two days,” said Channettee who beat Arpichaya Yubol by two strokes at this course where she celebrated her maiden victory (the 2nd Thai WPGA event) last November.

The teenage star will vie for her seventh crown this year, having won three straight Thailand Mixed events, two from another local tour and the Honda LPGA National Qualifiers.

“I’m quite confident with my game but I won’t let the pressure get the better out of me. I will give my best out there and feel happy no matter what happens,” added the rising star from Chiang Mai.

Samaporn ,  23 from Leoi, shot seven birdies against two bogeys on the third and 16th holes for a second round 67 and a total 135.

“My approach shots were good as I hit close to the pins which gave me several birdie opportunities. The rain delay didn’t affect me at all as I tried to warm myself up all the time to get ready,” she said.

Samaporn has been chasing her first professional victory after producing her best finish at sixth on another women’s local tour at Kabinburi Sports Club in Pachinburi last year. She admitted that she has been currently in a very tough situation and a win on Friday will help turn things around.

“I’m a bit motivated to have a strong finish in the final. Life has been tough these days, so I need some great result for a change,” added Samaporn who has no fear of the stardoms like Chanettee and Arpichaya, two of the strong contenders for the trophy.

“They are both younger than me. I will focus on my game and see them as ordinary people,” she added.

Arpichaya from Saraburi, with four birdies at the back and two more after the turn, fired an unblemished 66 which propelled her to third following a total eight under-par-136.

“I was playing unbelievably by hitting to the right spots to create myself many chances. I just hope that I could have made four more birdie putts,” said the 20-year-old who finished runner-up twice in the last Thai WPGA events.

She will try to make amends for her defeat to Channettee in the previous Thai WPGA event last November at the Phoenix Gold.

“We’ve played together several times. When you are in the same group with a good player, you need to focus on yourself. I hope it will be my day in the final,” said Arpichaya, looking for her first win since her last triumph on another local women’s tour in Prachinburi last year.

After the second round is completed, top 60 and ties will move into the third and final round due after 9am on Friday.

The Thai Women’s Professional Golf Association has been established with the objective to support and promote Thai women’s golf activities. The association aims at organizing local tour with world ranking points in the near future which will pave the way for Thai golfers to the international arena. In addition, Thai women’s golfers can use the tour to develop their skills to meet the universal standard. Moreover, medium-proficiency level players can gain experience from Challenger tours which can help produce new generation players and at the same time develop golf human resources and systematic golf organization locally.