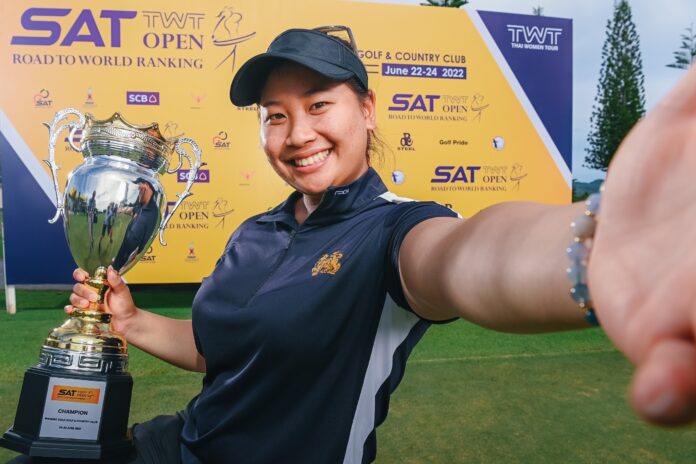 Heavy-favourite Chanettee Wannasaen lifted up her seventh trophy of the season following the fourth play-off victory over Samaporn Phangkhun in the  Bt 2.5 million SAT-TWT Open Road to World Ranking which was reduced to 36 holes at the Phoenix Gold Golf and Country Club in Pattaya on Friday.

The rain had suspended some of Thursday’s unfinished second-round play which was expected to resume on Friday morning. But Friday’s incessant downpour put the tournament farther behind schedule, forcing organizers to decide the winner based on results from two instead of three rounds.

Chanettee and Samaporn were tied at nine under-par-135 after 36 holes and had to set a duel in the extra play on the 18th hole. Both were neck-and-neck by having pars in the first three attempts before Chanettee sank in an eight-foot championship birdie putt to close the deal.

“I was quite excited as I barely had to play in the play-off. My hands were shaking in the first play-off hole but after that things got better,” said the 18-year-old prodigy who has won three TrustGolf Tour titles, two local women’s tour events, and the LPGA Thailand National Qualifiers this year. She has won a total of nine career titles. The win, her first play-off success as a professional player, serves as a psychological boost before she enters three European tournaments including the Women’s Scottish Open in July.

“I really need this type of confidence before I go to Europe. The condition will be tough for me as I don’t like cold weather. I will have to wear thick clothes and acclimatize to the weather as quickly as possible. I want to have better results this time,” said Chanettee who won Bt367,500 prize money for her second win on the Thai WPGA Tour after winning the second circuit last November on this same course. For Samaporn, she may settle for second but still, this is by far the best result in her career. She finally regains her confidence after having to endure a recent dismal form.

“I really feel good with my game again for the first time in a while. To be honest, I was under high pressure during the play-off as I had never been this close to victory before. But I’m so proud with the way I gave it a fight out there,” said the 23-year-old from Leoi who earned her biggest prize money of Bt223,440 as the runner-up.

“I have been in a tough situation, so this good result just came at the right time. I just wish I won the first prize,” said Samaporn in a light-hearted manner.

Samaporn also reveals that she is a cat lover and talks to cats more than to people. When asked for her reason, she said: “Cats may give you some scratches but they never stab your back.”

Two-time runner-up Arpichaya Yubol had to be content with a lone third finish following her two-day total of eight under-par-136.

Chanettee and Arpichaya, as the current No 1 and 2 on the Thailand TrustGolf Tour Order of Merits, have earned their tickets into the Scottish Women’s Scottish Open between July 28-31. But both will have two warm-up TrustGolf Tour series in the UK ahead of their trip to Scotland. 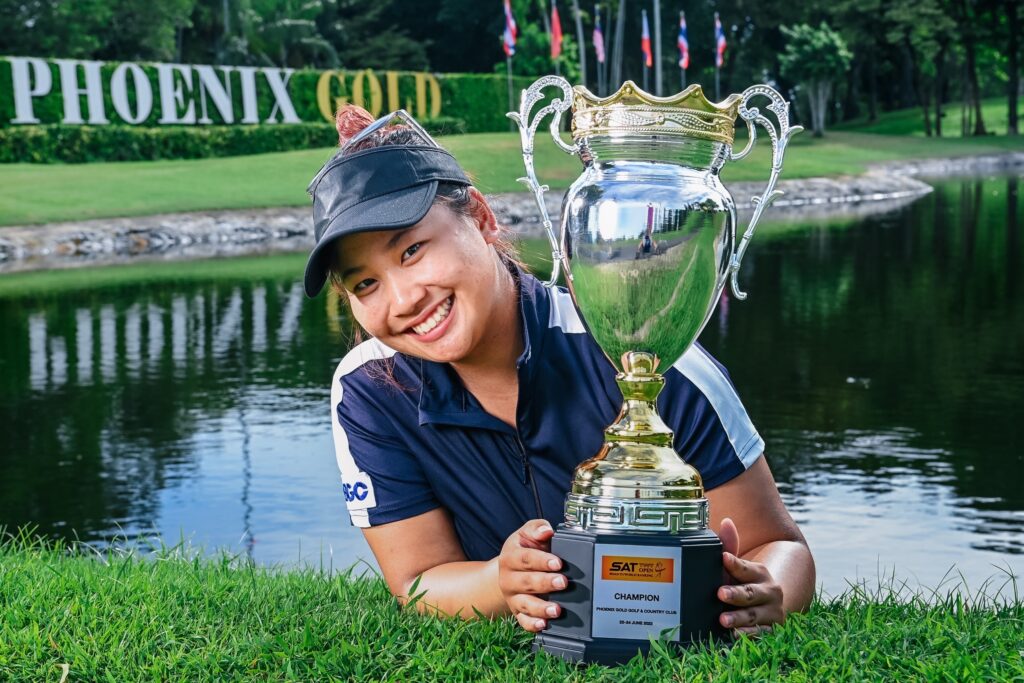 The Thai Women’s Professional Golf Association has been established with the objective to support and promote Thai women’s golf activities. The association aims at organizing local tours with world ranking points in the near future which will pave the way for Thai golfers to the international arena. In addition, Thai women’s golfers can use the tour to develop their skills to meet the universal standard. Moreover, medium-proficiency level players can gain experience from Challenger tours which can help produce new generation players and at the same time develop golf human resources and systematic golf organization locally.