Precocious teenager Chanettee Wannasaen recovered from a double bogey to shoot a second-round 69 and lead the midway stage of the Bt3 million Thailand Mixed hosted by TrustGolf at Rayong Green Valley Country Club on Friday.

The winner of four events in 2022 committed a double bogey on the 12th hole by teeing to the woods before raising her level to fire three straight birdies from holes No 3-5 to settle with a 69. Her two-day total was at eight under-par-134, one shot ahead of Parinda Phokun.

“I didn’t play as well as I did in the first round. The flag positions are trickier, and I didn’t hit to the ball to the positions I would want to. I hit several good chip shots to the greens but the ball rolled way back to the fringe,” said Chanettee who just turned 18 a fortnight ago.

Once again, she will enter the weekend rounds in the penultimate group. Thus far this season, she has accumulated four crowns: the two previous Thailand Mixed series in Cha-Am and Hat Yai, the LPGA Thailand National Qualifiers in Pattaya, and the Thai LPGA Tour event in Chonburi last Sunday.

“I don’t want to set my expectation too high this week. I just want to keep improving each day. The course sets up tough especially the pin positions. I must be extra careful on Saturday,” Chanettee added. 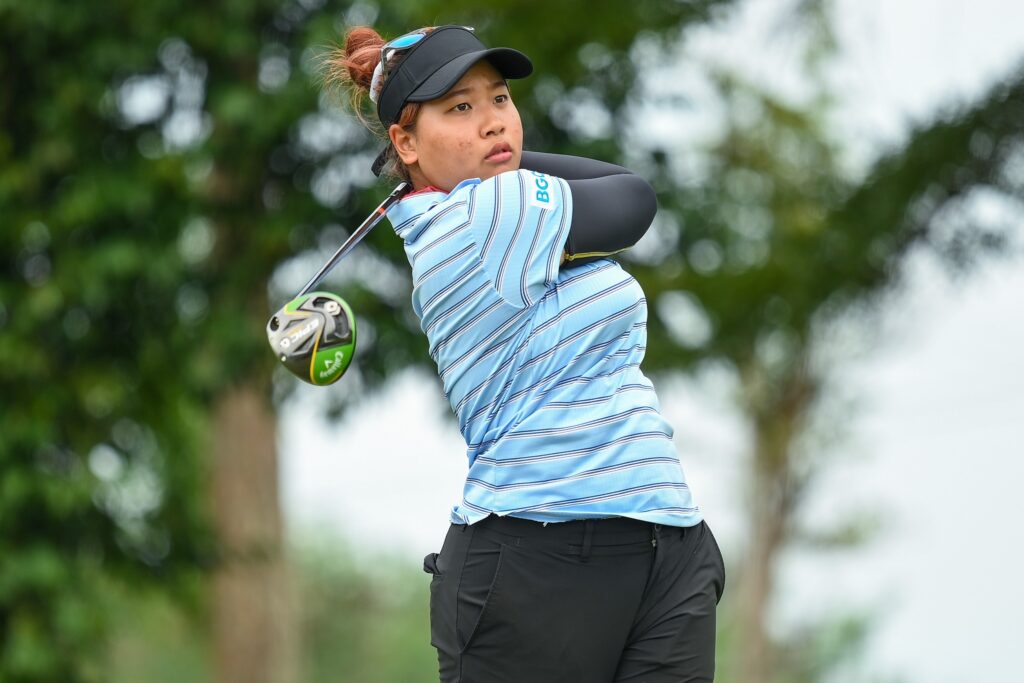 Parinda, who has 7 trophies on the Thai LPGA Tour in her cabinet, endured a roller-coaster day before settling with a 67. She produced a brilliant form to shoot five out of her eight birdies on the front nine only to commit a double bogey on the 11th hole and back-to-back bogeys on the 14th – 15th holes.

“I played unbelievably well at the front but I lost my momentum at the back, especially on the 14th and 15th holes which are tough,” said the 25-year-old who is seeking her first victory of the season.

“On Saturday, I have to be more consistent with my chipping and putting game. I also have to be more prudent on the 14th and 15th holes. If I hit the wrong spots, I will be in trouble,” added the 2017 Thai LPGA Tour No 1.

Pannapa Polnamin, with a second-round 69, sat three strokes back on a total of 137.

Following two shots behind were up-and-coming Denwit David Boriboonsub, the only man in the top five, who carded a 68, and Princess Superal who hit a 66, both with a total 138.

Only nine players hit under par after two days. The other four were Sangchai Kaewcharoen, two under, and Chaiyapond Ouitragoon, Kusuma Meechai, and inaugural champion Arpichaya Yubol, each with one under and a total of 141.

Fans can watch live coverage of the third Thailand Mixed either on AIS Play APP or TrustGolf Facebook and Youtube.