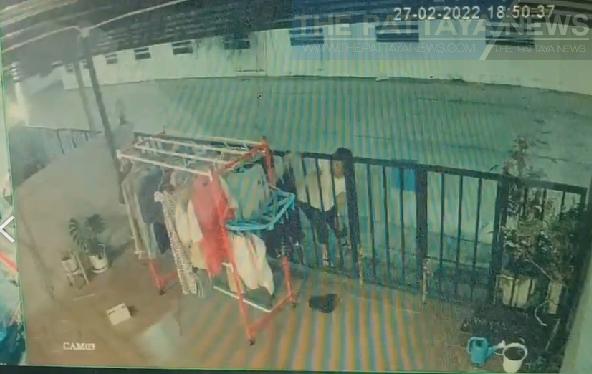 A thief was caught red-handed on CCTV while he was reportedly stealing women’s underwear at a house in Mueang Chonburi on February 27th.

The house owner was named by police only as Ms. Bee, 31, who filed a report to the Sanesuk Police. She told police, “I live at a housing estate in the Mueang sub-district of Sanesuk, near Bangsaen.”

“At about 6:50 P.M. on February 27th, a male thief stole a total of twelve women’s panties that were hanging on a clothesline to dry in front of the house before speeding away. This is the third time that underwear has been stolen in the area based on speaking to neighbors in the community.” Bee explained.

“ I am afraid that this person may be a disturbed individual. He needs to be quickly caught.” Bee stated, expressing her opinion.

CCTV footage was shown to The Pattaya News team and given permission to be released that appears to show a male suspect indeed selecting and taking women’s underwear from a clothing line at a private home.

The Sanesuk Police Chief Colonel Pattana Robroo told The Pattaya News, “We are checking CCTV footage to find the suspect as soon as possible. We are aware this has happened before and the suspect is a repeat offender.”