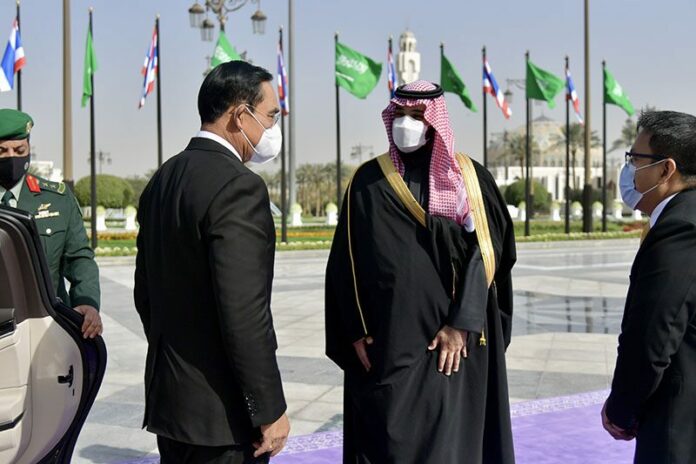 Thai Prime Minister Prayut Chan-O’Cha paid an official visit to Saudi Arabia on Tuesday, January 25th, and a courtesy call on the country’s Crown Prince and Deputy Prime Minister for the first time in more than 30 years to tighten bilateral relations between the two countries, according to the Thai Government House.

Prayut revealed to the Thai public after the meeting that Thailand and Saudi Arabia have discussed how to resume a diplomatic relationship. They would initially appoint ambassadors and establish a mechanism to revive and proceed bilateral cooperations in various aspects, such as trade, investment, food sustainability, public health, and tourism as well as cooperation in new areas, such as the environment, renewable energy, digital technology, and cyber security.

In addition, both also agreed to cooperate and support one another in multilateral summits such as the Organization of Islamic Cooperation (OIC), ASEAN, the Cooperation Council for the Arab States of the Gulf, (GCC), as well as Thailand’s host of APEC this year. The Prime Minister continued that the restoration of the relationship would facilitate travel between the peoples of the two countries, including more trade and investment opportunities, and allow more Saudi travelers and businessmen to visit Thailand, which will help strengthen Thailand’s energy security and will generate at least 5 billion baht in the domestic economy.

“Finally, I would like to congratulate the beginning of a new era of Thai-Saudi diplomatic relationship. This would undoubtedly bring the mutual benefits of Thai and Saudi citizens.”