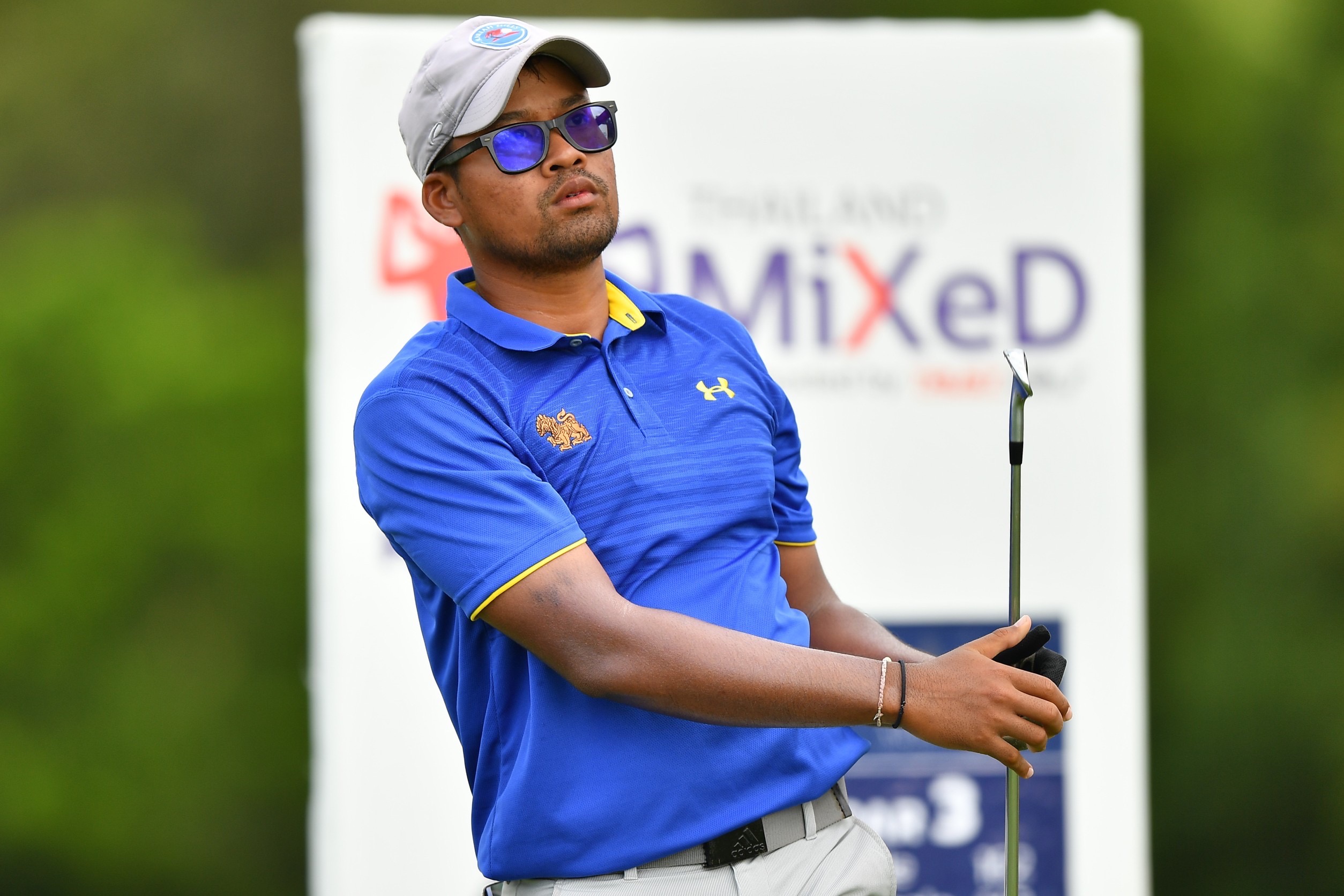 Wichayapat Sinsrang remained on track in his bid for a maiden title as he held on to the lead after day three of the Bt5 million Thailand Mixed hosted by TrustGolf at the Aquella Golf and Country Club on Thursday.

In his chase for a breakthrough win after turning pro earlier this year, the 24-year-old was engaged in a see-saw battle with star players Sadom Kaewkanjana, Prom Meesawat, and teen prodigy Ratchanon Chantananuwat for the top of the leaders’ board.

But a brilliant eagle chip on the 15th hole finally propelled him to take the outright lead. He signed off with a 67 (including four birdies and a bogey on the ninth) and a three-day total of 22 under-par-194, a shot ahead of Sadom, the 2021 No 1 player on the All Thailand Golf Tour.

Wichayapat, also named as “Tiger” after American golf superstar Tiger Woods by his father, accepted that he was under pressure after superb displays of from in the first two rounds (64 and 63).

“(Between holes 7-13) I couldn’t score at all as I was a bit under stress. But I was so lucky to make that eagle and took a solo lead,” said the unfancied player from Nakhon Ratchasima. He is eyeing his best finish in a professional tournament after his best attempt at lone sixth in the Singha Laguna Phuket Open in October.

“My game plan for the final round is to be focused, study the weather condition well, and play more carefully,” added Witchayapat, hoping to earn the winner’s cheque of Bt750,000 which will be the most handsome prize money in his career.

Sadom who has four wins and three runner-up positions in 2021 once again set himself as a title contender. His bogey-free round of 66 saw him trail the leader by a shot on 21 under-par-195.

“I had a slow start and it took me a while to get into momentum. After I saved a long par putt on the seventh hole, I began to feel more confident and hit five birdies at the back nine,” said the 23-year-old Sadom. A win in the Friday’s final will see him kiss goodbye to the season in style.

“The tee and approach shots will be the key. If you hit the right positions on the greens, you are likely to make birdies. Several greens here are undulating, so you just have to go for the right positions,” said Sadom, looking for his fifth title this year.

LPGA member Pavarisa Yoktuan caused a stir at the Aquella on Thursday as she set a new course record with an astonishing 61, which also marks her personal best. The 27-year-old decorated her error-free scorecard with 11 birdies, eight at the front nine. She came at lone third with a total of 196.

“I hit very close to the pins and made those putts. I worked on my putts during the morning practice as I barely made my putts in the afternoon round yesterday,” Pavarisa explained the reason why she was on fire.

Pavarisa will be determined to become the second woman to win the Thailand Mixed after Arpichaya Yubol in March. The Nakhon Si Thammarat-based will also attempt to stem her long drought of title since winning the Thai LPGA Championship in 2015.

“I will focus on my game and try not to think about others or what’s going on. Everyone, men or women, stands an equal chance at this course,” added Pavarisa whose best LPGA finish was at tied fifth in the 2019 Marathon Classic.

Three shots off the lead was 14-year-old amateur Ratchanon who despite an opening eagle had to be content with a 69 (including four birdies and three bogeys) and a total 197.

“Everything fell apart today, the iron, the driver, and the putt. I made a bad decision by trying to go on top too much while it was just the moving day, not the final. I paid the price for being concerned with the scoreboard too much,” said Ratchanon, looking for his first win on a pro tour after coming second in the Singha Laguna Phuket in October.

“I’m just three strokes behind, so it’s still possible for me to win. But you need to shoot a low score, may be 8-9 under to make it possible,” the promising teenager said.

Two-time winner Prom Meesawat, with a 69, and two female players Chanoknan Angurasaranee (66)  and Natthakritta Vongtaveelap (63), amateur, fell a shot behind after each hit a 198.

The tournament is being staged under strict protective protocols against COVID-19. ATK Swap test is provided for players, personal caddies, players’ companies, and officials. Only those who test negative are permitted to participate in the tournament. Furthermore, fans who produce negative ATK results within 72 hours before the tournament are welcome at the course.

Viewers can watch live streaming of the Thailand Mixed hosted by TrustGolf on AISPLAY APP, https://www.facebook.com/trustgolfclub, and at TrustGolf Youtube channel from 9 am onwards during tournament days.

The Thailand Mixed is organized by TrustGolf, an indoor training center with advanced technology, It is supported by the Sports Authority of Thailand, the National Sports Development Fund, the Ministry of Tourism and Sports, Bangkok Bank, B.Grimm Company, Bond Holdings, AISPLAY, Bridgestone, Trust Pharmacy, Trust Live Streaming,  the Center for Covid-19 Situation Administration, Aquella Golf and Country Club and S.Khonkaen.