A local grocery store has been damaged after a pickup truck driver crashed into the business and nearly ran through the owner’s bedroom in the middle of the night in the Bor Thong district.

The Bor Thong Police was notified of the accident at 2:00 A.M. over the past weekend at a grocery in Bor Thong.

First, a video of the incident, with CCTV footage released with permission to TPN media, is below:

Law enforcement arrived at the scene to find the damaged grocery, two damaged motorbikes, and a pickup truck sitting in the middle of the store. A tree in front of the grocery was cut clean in half. The grocery owner, Mr. Panumart Inpet, 41, was waiting for reporters and police at the scene.

Mr. Panumart told TPN media, “I was sleeping in my small personal bedroom inside the grocery. I heard a loud noise and ran into my shop only to find a pickup truck, as seen below, sitting in the middle of the grocery store. The truck almost ran into my bedroom near the back of the shop.” 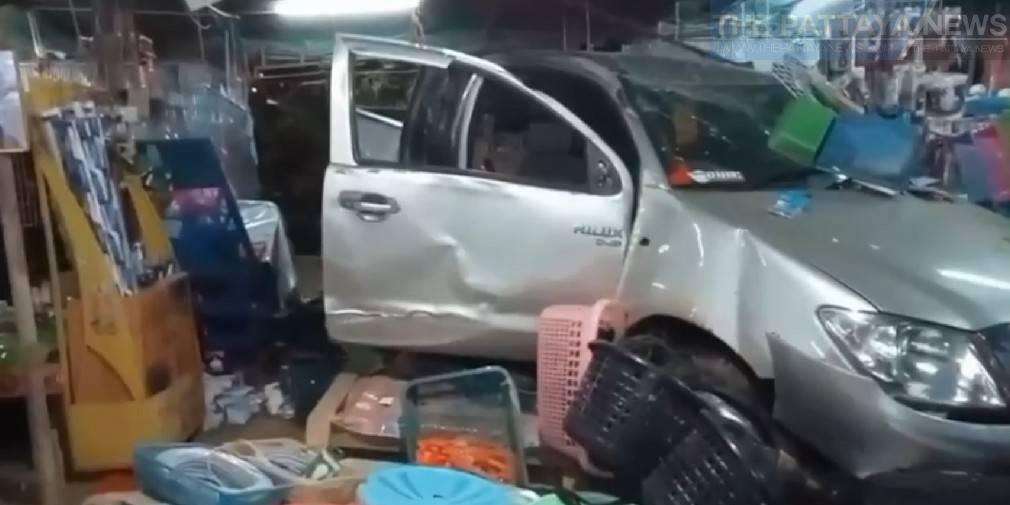 “The cost of damages is estimated at 45,000 baht so far. The pickup truck driver (whose name was withheld by Bor Thong police pending further investigation and interviews) told me he will be responsible for the damages after he recovered from his injuries.” Panumart stated.

The exact cause of the accident was unclear and the unidentifed driver remained at a local hospital recovering from several moderate injuries according to a Bor Thong police official.