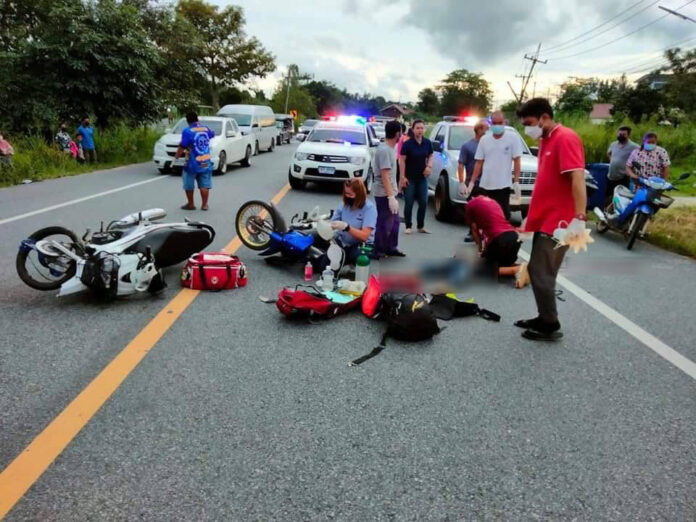 A Myanmar driver has been pronounced dead at the scene while a Thai driver has sustained serious injuries after their two motorbikes collided earlier this week in Banglamung.

The Huay Yai Police was notified of the accident at 6:00 P.M. on Monday (October 11th) on Chaiyaphon Vithi Pong Road in Khao Maikaew.

Emergency responders and The Pattaya News arrived at the scene to find two damaged motorbikes on the road.

The Myanmar driver, Mr. Yan Rin, 28, was pronounced dead at the scene. The other young Thai driver, Mr. Kritsada Hangoi, 18, had sustained severe injuries. He was rushed to a local hospital for urgent medical assistance and aid.

Mr. Yan’s friend who later arrived at the scene but declined to give his name to the Thai press reportedly told Huay Yai police that last month Mr. Yan had another accident but had sustained only minor injuries. His friends had warned him to be more cautious about his driving, but tragically, he appeared to have not listened to the warnings.

Police are checking CCTV nearby to find the cause of the accident and at this time have not determined the exact cause or liability.