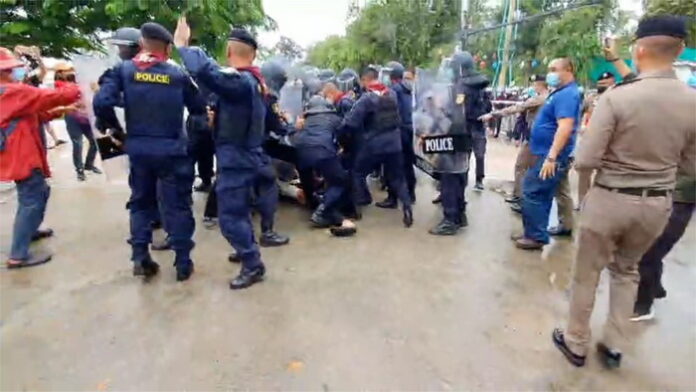 A clash between crowd control police and pro-democracy demonstrators was reported in front of the City Hall in Khon Kaen province during the visit of Deputy Prime Minister Prawit Wongsuwan today, October 14th.

The group, led by Khon Kaen Por Gun Tee, was gathering in front of the City Hall and waiting for the Deputy Prime Minister, who was scheduled to observe and attend a briefing of the flood situation in the province.

The demonstrators started to install a portable amplifier and give public speeches, criticizing the work of the government. The police then approached the group for negotiation, asking them to refrain from using the amplifier without permission as it was violating the Communicable Diseases Act, according to police officials. However, there were clashes between both parties. Pol Maj Gen Paisal Luesomboon, the deputy commissioner of the Metropolitan Police Bureau, was reportedly physically attacked before the officials started to arrest the protesters during the chaotic situation.

The police insisted on prosecuting the demonstrators who reportedly attacked the law enforcement officers. Meanwhile, they had strengthened the force to monitor outside and inside the City Hall for security throughout the official meeting.

TPN media will provide any further updates on this story as it becomes available.