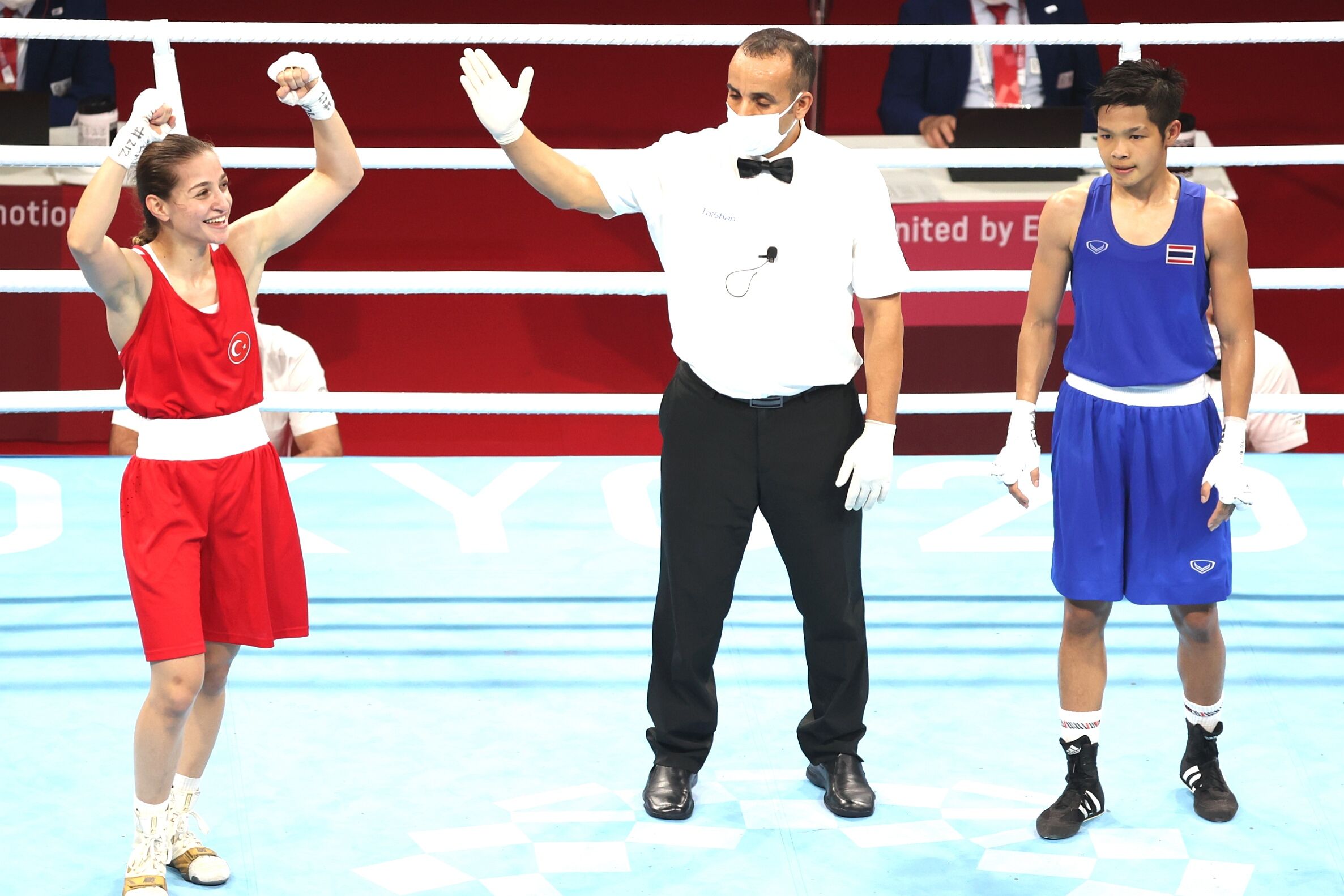 1 August 2021: Calamity struck for Thai boxing on Sunday as Jutamas Jitpong and Chatchai-Decha Butdee fought impressively but lost their chance of grabbing medals at the Kokugikan arena.

In the women’s 51kg quarter-finals, 2019 SEA Games bronze medalist Jutamas went down to 2019 World Championships silver medalist BuseNaz Cakiroglu 0-5 in the morning. More bad news came in the afternoon when Chatchai-Decha narrowly lost to two-time Olympic bronze medalist Lazaro Alvarez of Cuba 2-3 in the last eight of the men’s 57kg.

Juthamas fought aggressively on the front foot while the Turk stood back, waiting to score points when the Thai fighter dropped her guard. The 2019 European Games champion proved the superior boxer from the start, with Juthamas struggling to adapt to her sniper’s style.

“If I had been leading from the start, I would have boxed more freely. I tried to change my game plan, but it just went her way. It’s a shame that my run ended at this point,” said the 23-year-old fighter from Nakhon Si Thammarat.

Juthamas, in tears, vowed to get even with her opponent in the future.

“If I lose to you, don’t retire so soon as I’m going to get my revenge. I will go back and train even harder. We will meet again for sure in the future,” said the Thai, who apologized to fans for failing to deliver a place on the podium.

“I’m not a talented boxer, but I am a hard-working boxer. I want to make people at home proud and I want them to know that this girl from the neighborhood is a good boxer. I’m sorry that I didn’t make it. If I compete in the 2024 Games, I will try to make amends,” she added.

Chatchai-Decha, meanwhile, put up the fight of his life in a desperate bid to win a medal in his third and farewell Olympics. However, three-time World Championship winner Alvarez showed superior skills at the crucial stage to dash the Thai’s hopes.

“I gave my all out there. We have equal experience and know each other’s style. But as a Cuban boxer, he’s fast and difficult to fight against,” said the 36-year-old Thai in his final bid for an Olympic medal.

“I can say that I am proud of how I performed in this Olympics. I have to thank the fans especially my family for always being by my side. I may not have achieved my dream but I tried the hardest I could,” said Chatchai-Decha who also added that was his last match as a national athlete.

With the two boxers out of the tournament, Thailand’s last boxing hope is Sudaporn Seesondee, who will fight for a bronze medal in the women’s 60kg quarter-finals against 2018 World Youth and Youth Olympic champion Caroline Dubois of Great Britain on Tuesday.