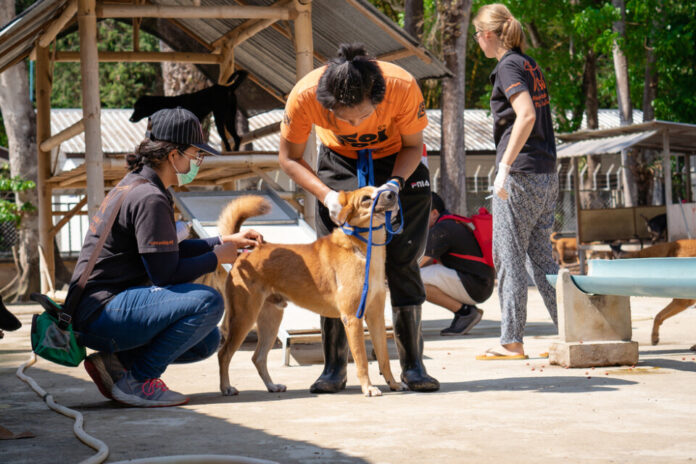 The following is a press release, their statements and opinions are entirely their own.

Soi Dog Foundation has come out in support of volunteers at the Phuket Stray Dog Shelter in Thalang who filed an official complaint to Governor Narong Woonciew last week concerning their ongoing ban from helping at the shelter.

With their previous complaints to the Phuket Provincial Livestock Office (PPLO) ignored, and their concerns for the welfare of the dogs at the shelter rising, the volunteers took the matter to Phuket City Hall on Friday (July 2).

Soi Dog shares their concerns and is strongly urging Governor Narong to take action. Like the volunteers, Soi Dog has been banned from helping at the Phuket Stray Dog Shelter ؘ– also known as the government dog pound – since January this year. The foundation was notified of the decision in writing by the Phuket Provincial Office of the Department of Livestock Development (DLD). The letter stated that, while responsibility for the shelter was being transferred from OrBorTor to OrBorJor, external assistance would not be permitted. The letter also advised that Soi Dog would be contacted should any dogs require emergency treatment; however, no such contact has been made.

Soi Dog has assisted the Phuket Stray Dog Shelter for many years. Their veterinary team, community outreach team, and animal rescue officers work together to ensure that all dogs housed there are neutered, vaccinated, dewormed, protected and against ticks and fleas, and treated for any other health issues. Last year alone, they administered over 4,600 treatments on-site and admitted over 250 dogs to their own shelter in Mai Khao for further care – all at Soi Dog’s expense.

With no help from Soi Dog or local volunteers at the understaffed and underfunded shelter, concerns are growing daily for the welfare of the 1,000+ dogs who live there.

In March, Soi Dog raised the issue with the DLD in Bangkok who subsequently granted them permission to visit the shelter to vaccinate the dogs, as they do in March every year. However, the Phuket Provincial Office of the DLD has continued to refuse Soi Dog staff entry on the grounds of Covid-19, despite the visit complying with all disease control requirements, the local population being largely vaccinated and the Phuket Sandbox scheme now underway. The dogs’ vaccinations are now many months overdue, putting them at real risk of contracting deadly infectious diseases such as parvovirus and distemper.

Soi Dog is calling on Governor Narong to uphold his duty of care and stop the potential suffering of the dogs at the shelter by taking the simple step of reopening the shelter and accepting the assistance being freely offered.