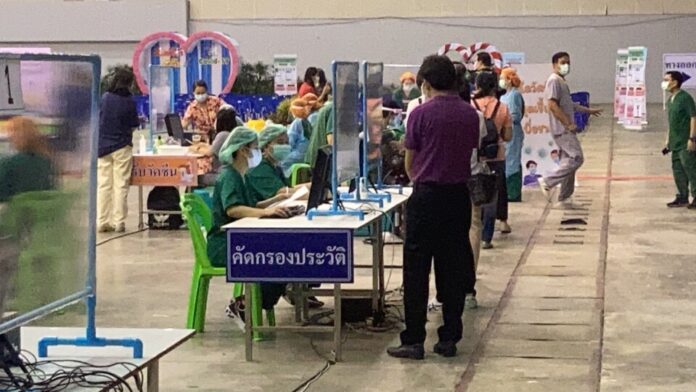 The Chonburi Department of Public Health announced 127 new and confirmed cases of Covid-19 today, May 21st, which is a major jump in cases from having 65 yesterday. Chonburi has significantly stepped up testing at industrial estates and workplaces in the province, which is a major reason cases rose due to findings in related workplaces.

Additionally, 3,020 people in total have now been released from medical care and fully recovered since this current wave began. 117 people were released yesterday.

Mueang Chonburi with 40, Si Racha 14, Banglamung (including Pattaya) 9, Phanat Nikhom 2, Sattahip 3, Ban Bueng 5, Pan Thong 52, Ko Chan 1, and one patient was transferred from another province to Chonburi for medical care.

In the last day, a total of 224 close contacts were tested from contact tracing, and 1,964 people were tested in proactive testing when medical staff goes out into the community.

All are pending results. Chonburi has also begun proactive mass testing at industrial estates and for workers with social security at “high-risk” locations that have interactions with the general public (like supermarkets, public transportation, restaurant staff, etc) and tested 3,088 cases in this category.

The vast majority of cases are driven from two clusters, one at a factory in Mueang Chonburi where most workers are migrant workers living at a densely populated camp in Phan Thong. The second cluster is also a migrant worker camp. Mass testing at migrant camps and factories is set to continue over the next several days where conditions often have many people living and working closely together.

The vast majority of cases, according to Public Health Ministry Officials are asymptomatic or mild, with only roughly ten percent having moderate or serious symptoms, generally those with pre-existing health conditions.

Pattaya officially began its mass vaccination campaign yesterday, May 20th, which is set to continue today. The goal is to vaccinate roughly 20,000 people in two days with another 100,000 doses of Covid-19 vaccines set to arrive in a few weeks in June, enough for another 50,000 local residents.