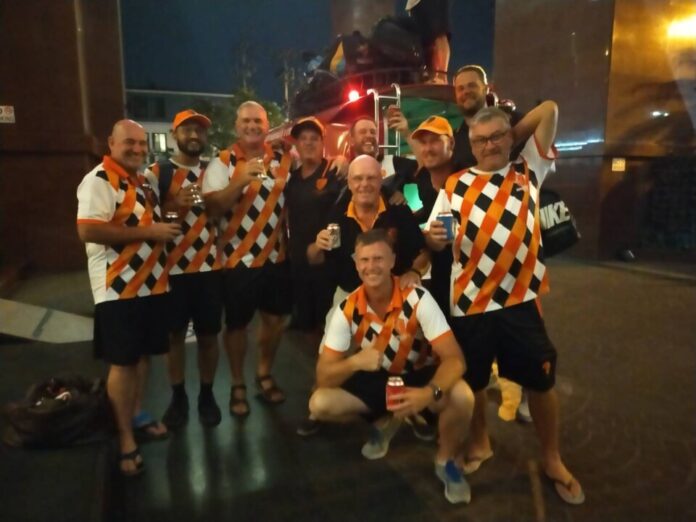 Part one can be found here!

Correction: The original version of this article was a repost of Part One. That has been corrected.

Day 2 of the Chiang Mai Big Bash 8’s started with a delay of 90 minutes as part of the pitch was flooded from heavy overnight rain.  PCC was in third place and looking for a victory over the Lords of the Beers to secure a play-off place in the final, probably against Lanna.

PCC won the toss and chose to field.  Clayton Nelmes and Kirat Arora opened for LotB against Wez  Masterton and Jainish.  The aim was to keep LotB under 10 runs per over which PCC managed to achieve initially as LotB were kept to 23 runs after 3 overs. Bernie Lamprecht bowled next and was fairly expensive in the fourth over but it was Wez that made a breakthrough in the 6th over by bowling Kirat for 28. 48 for 1 after 6 overs and Shabeer took the crease.  Runs flowed more quickly as Jainish went for 20 in his second over and finished with 32 in 2 overs, whilst Gary Moolman entertained the spectators with some unusual fielding practices that caused Roddy Lorrimer and his trumpet to play some derisory tunes. The run rate continued to climb despite some good fielding from Ian Liddell in the deep.  Ian had a go at bowling as both Clayton and Shabeer marched towards their retirement scores, by which point LotB was at 93 for 1 after 9 overs.  Matt bowled the last over in which Shabeer retired for 32 on the fourth ball.  The fifth ball saw Pavit Grover stumped by sharp work from Simon Wetherell and the last ball was a 2 from Shafi to bring Lotb home for 106 for 2.  A very defendable score.

PCC sent in their big hitters, Wez and Matt against Shabeer and Kirat.  Wez did his usual thing and smashed both bowlers out of the ground – Kirat went for six 4’s and two 6’s in his hugely costly 48 from 2 overs. Wez hit a 6 off the last of his 14 balls faced and retired for 36.  Simon Wetherell replaced him but only lasted one ball as he was bowled for a golden duck by Clayton Nelmes. PCC was at 48 for 1 after 4 overs and ahead of the required run rate.  Trevor Moolman took the crease and immediately set about Lotb with five 4’s and a 6 whilst Matt rotated the strike.  68 for 1 after 6 overs and still ahead of the run rate.  Trevor retired on 31, thus leaving Bernie facing 1 ball and Matt on 24 n.o.  PCC had cruised to victory with 15 balls to spare and secured a place in the final against Lanna CC who had just beaten Lamphun by 10 wickets.

In the final, PCC lost the toss and was asked to bat.  Wez and Matt were keen for a final fight and looked confident at their creases.  Richie George’s spin opened the Lanna attack and Wez got a top edge that skied to the keeper, Mehta, for a golden duck.  As they had crossed, Matt faced the next ball and edged to Mehta for another golden duck and a hat-trick ball chance for Richie. What a calamitous start and Lanna couldn’t believe their luck.  It was going to take a gargantuan effort to pull the rabbit out of the hat, but could PCC pull off a miracle?   Simon Wetherell and Trevor Moolman were at the crease, and whilst Simon had a boundary to his name, he didn’t quite get enough of another ball and he was caught for 8 by Siva Shankar off Richie for his 3rd wicket for 11 runs – best figures of the tournament.  PCC was in trouble at 18 for 3 off 2.3 overs.  Enter Bernie Lamprecht.  He and Trevor decided they were going to recover from the disaster and Lanna decided to help with Mr. Extras whose help was graciously accepted. Trevor continued to bash boundaries and Bernie rotated the strike.  By the 7th over, PCC had recovered somewhat at 54 for 3, but there was still much work to be done.  Trevor battled away and got a 6 off his final swing to retire at 35 and PCC was 67 for 3.  Bernie and Jainish scored well against Jon Scales with another 13 runs which left Ton to bowl the 10th and final over.  Bernie hit a 6 and PCC finished their innings on 101 for 3 after a shocking start it was indeed a miracle, but could PCC defend it against a formidable batting attack.

Daniel Jacobs and Jon Scales opened for Lanna and faced Matt Harkness.  John was caught by Bernie Lamprecht on the second ball for a duck as PCC aimed for a copy-cat start.  Well, that didn’t quite happen and Bernie bowled the second over to leave Lanna at 19 for 1.  Matt and Ian Liddell continue to try to contain Lanna, but boundaries still accrued and Lanna got to 37 for 1 from 4 overs – nothing between the teams.  Bernie had a loose over which went for 14 and then Daniel got a single from Wez Masterton and retired on 32 which brought Wally Persaud to the crease.  During the 6th over Shiv Shankar piled on the runs and Lanna was getting ahead.  In the 7th over Jainish kept runs to a minimum and good fielding from Trevor Moolman had Shiv run out for 22.  71 for 2 from 7 and the match was on a knife-edge. Wez got Wally caught for 11 by Ian Liddell without adding to the total and the tide might have turned.  Wez bowled beautifully as Richie George only lasted 3 balls before being caught by Bernie for 2 and Lanna was in deep trouble at 73 for 4 from 8 overs with 29 need for a win.  Sam Mehta replaced Richie but returned to the pavilion immediately having been bowled by Jainsh for another golden duck and PCC was on a roll with 3 wickets for 2 runs and Lanna was 77 for 5 with one over remaining.  Ton and Lang could only take 7 off Ian Liddell’s last over and Lanna fell short by 17 runs.  PCC had achieved the come-back of all come-backs and retained the Chiang Mai Big Bash 8’s trophy.  It was a stupendous performance against the Northern Thailand teams that have Thai National or ex-National players on their sides.

Lamphun played LotB for the 3rd place play-off.  Lamphun scored well with Chanchai, Cher, and Choo all retired with 31+ and closed their innings on 118 for 1.  LotB tried their best but the Lamphun bowlers kept them contained and they closed at 78 for 1.  This Lamphun won by 40 runs and took 3rd place.

It was a fantastic tournament and we all thank the organizers, officials, the Gymkhana cricket ground, the staff, and all the sponsors for their support in making it a premier item on the Thailand cricket agenda.

For those who like statistics the PCC players stats were as follows:

For those that would be interested in watching the Finals of the Bangkok Cricket League Division A and B in late April and early May,  check out the www.bangkokcricketleague.com website.  All the matches will be at Pattana Sports Resort.  Food and drink can be purchased.