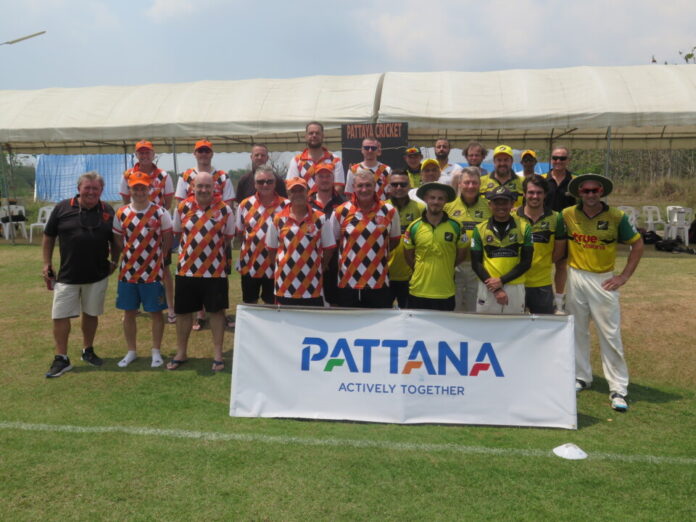 PCC played a friendly T20 match against a largely Premiership level Southerner’s CC side at Pattana Sports Resort on 7 March 2021.  The friendly gave PCC the opportunity to give players who bat down the order a chance to swing the willow and the bowlers to hone their accuracy.

Southerners won the toss and decided to field, which was odd because two players were still AWOL.  PCC opened with Wez Masterton and Dan Allan against Chanchai and Hico McDonald, whereupon Wez was dropped at first slip off the first ball from Chanchai.  A serious error by the fielding team. This scenario is becoming a bit of a habit.  Dan Allan scored singles to give Wez the strike and smash boundaries and the score ticked along nicely.  Tom Ward and Prashant took over the bowling and quickly removed Dan Allan, caught by Daniel Jacobs at mid-off for 6.  Luke Stokes arrived and kept rotating the strike whilst Wez blazed away until he retired on 50 with 6 4’s and 2 6’s.  Simon Wetherell and Luke’s run-rate was curtailed a little by Daniel Jacobs’ accurate bowling but PCC was a creditable 65 for 1 at drinks (10 overs).  After refreshments, Simon hit some boundaries before being bowled by Wasim Ahmed for 17 and he was replaced by Matt Harkness who only managed 3 before being caught in the deep by Kunal Misra off Wasim Ahmed.  PCC was having a bit of a stutter at 103 for 3 off 16 overs.  Bernie Lamprecht and Luke managed a few more runs before Hico Macdonald’s final over which had Luke caught by Daniel Jacobs for 25 and Bernie bowled for 9 in the 19th over.  Ryan Driver and Trevor Moolman hit Chanchai for 10 runs in the final over and PCC finish with 139 for 5 in 20 overs.  A good score but hardly a challenge to the likes of the Southerners.

The Southerners opened with Daniel Jacobs and Andrew Purser who faced Ryan Driver and Matt Harkness.  Despite the obvious abilities of Ryan and Matt, the batsmen were too good and kept the run rate up with plenty of boundaries.  Daniel Jacobs smashed 52 Retired Not Out with 3 4’s and 3 6’s from 34 balls and was replaced by Hino Jordan.  Andy Purser should have been caught in the deep by Bernie Lamprecht, whose huge and normally very safe hands failed him.  As serious error as Andy went on to score 45 before being bowled by Wez Masterton.  Simon Wetherell dropped a difficult running catch, but it would not have made a difference to the result.  PCC bowlers plugged away with Bernie Lamprecht’s bowling being the tidiest at 0 for 25 from 4 overs. Inevitably, the Southerners reached the required score with overs to spare. Hino, smashing a 6 over square leg for 30 Not Out and reaching 140 for 1 in 16.3 overs.  A win by 9 wickets.

PCC’s next match is at PSR on 14 Mar at 1300 against the Kerala Strikers – a must-win match.  Please come along and watch – there are food, cold drinks, and a shady tent to sit under.