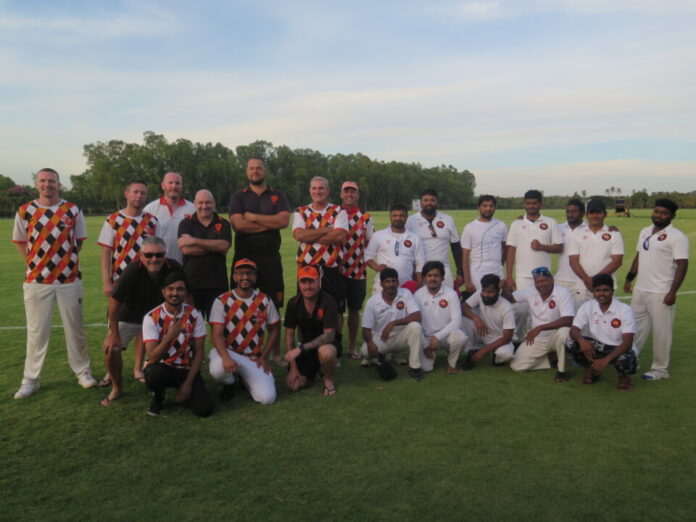 PCC’s return to the BCL Division A was played at The Thai Polo Ground, Nongprue on 20 Dec 2020 on a sunny but cool windy day against TCC from Bangkok.  PCC gave away 39 extras (34 wides), whilst TCC dropped catches and missed several runout opportunities as both runners and fielders became evermore frantic and desperate to secure a win.  PCC claimed victory by one run off the last ball.

PCC won the toss and decided to bowl.  TCC opened with Meeran and Ramez verus Wezley Masterton.  Wez began the wides-fest and whilst Meeran scored a few, it was Mr Extras that kept the scoreboard ticking along.  Ramez was the first wicket to fall in the third over to Wez, caught by Jainish at mid-wicket.  Anfas replaced Ramez, but only lasted 4 balls before he skied a ball to Luke Stokes at short mid-wicket off Andy Emery’s bowling.  18 for 2 in the 4th over and things had started well for PCC.  Mahroof entered at number 4 and was kept in check by tidy bowling from Andy Emery.  John Holland bowled a few loose overs with several wides and Mahroof swatted the first 6 of the match.  Ian Liddel (Reds) and Bernie Lamprecht bowled from the 9th over with Reds also having accuracy problems.  Bernie bowled well and removed Meeran caught and bowled for 11 in the 12th over.  53 for 3 of 12.  Ibrahim replaced Meeran and batted well for the remainder of the match to score 40 not out.  Shiv came on to bowl and had an immediate impact by having Mahroof (19) caught by Bernie at long-off and Humeed caught for a duck by Andy Emery.  70 for 5 after 16 overs.  From this point on, it was Ibrahim and Mr Extras that were keeping the TCC ship afloat as lower order batsmen failed to contribute significantly and sharp fielding from PCC took its’ toll. Sheik was run out for 5, Ashed run out for 1 and Niyas run out for a duck.  Another good catch from Luke Stokes removed Mubarak for 8 off Bernie Lamprecht’ s bowling who finished with 2 for 17 off 5 overs.  TCC finished their innings on 130 for 9 and a defendable score on a very slow outfield.

PCC took the crease with Wez Masterton and Simon Wetherell against Ramez and Meeran.  Wez, who doesn’t do running, was restricted to 2 scoring shots and 12 dot balls.  The slow outfield prompted Wez to go aerial, which got him caught by Anfas off Rameez for 5.  Simon was hitting the ball hard and got 4 boundary 4’s.  Luke Stokes replaced Wez, but made a schoolboy error when taking a guard outside of the crease.  This was spotted by the keeper and the umpire.  Out stumped for 1 off Ashed and PCC were 35 for 2 after 8 overs.  This bought Ryan Driver to the crease, still suffering from a rugby injury (he should no better at his age).  Simon W departed shortly after for a brisk 25 off 21 balls having been caught by Mahroof off Niyas.  Ryan was dropped on zero which proved to be a costly mistake as he and Simon Philbrook (C) steadily added singles and the occasional 2 or 6.  Simon was bowled for 13 by Ashed and Bernie Lamprecht took the field at 89 for 4 in the 17th over.  Nothing between the teams.  Bernie only managed 1 run before being caught in the deep by Humeed off Meeran.  John Holland backed up well in support of Ryan and good running enabled 2’s.  John was bowled for 6 by Ramez with the score on 119 for 6 with 12 needed from 9 balls.  Jainish to the crease. The last over was bowled by Mahroof, 9 needed.  3 byes were taken off the first ball and a runout was missed.  2 runs to Ryan and then he was caught 3rd ball by Ibrahim in the deep for 48.  Shiv to the crease.  2 more runs and another missed runout.  A leg bye and a tie with one ball remaining.  Shiv hit the winning run off the last ball.  131 for 7 and a win by 3 wickets.

The man of the match award was given to Ryan Driver for his important batting contribution.

A thrilling return to BCL cricket, but PCC’s last match at TPG as they are moving to Pattana Sports Resort in January, please come and support.  The scorecard can be found at www.pattayacricketclub.com