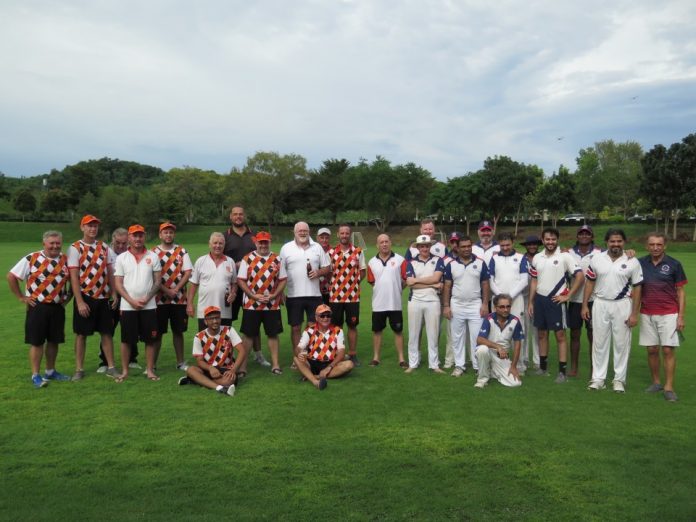 The second leg of the Dunford-Philbrook Trophy was played on Sunday 27 September at St Andrews on a warm sunny day.  The trophy is awarded annually, now in the 11th year, to the winner of a series of matches that take place in that year.

The match was a 30 over affair with retirement for those lucky enough to reach 50 (runs, not years of age).  5 overs were bowled from one end and the ends would be swapped.  The wicket had been nicely prepared by the groundsman and the outfield was very slow due to some damp patches and soft grass – there were not going to be many boundary 4’s.  The ground was surrounded on 2 sides by a water filled ditch, so the ball went for a few swims during the match.

Ben Eastwell won the toss for the British Club and chose to bat.    Rahul and Sunil opened the batting whilst Wez Masterton and Matt Harkness opened the bowling.  Both bowlers struggled to find their line but soon wickets started to fall at regular intervals.  Sunil was caught for 6 in the second over and replaced by John Fudge.  He and Rahul, alongwith Mr Extras, kept the scoreboard ticking along until Rahul was run out for 9 by a good throw from Reds.  Denzil looked threatening until he misjudged a slower ball from Bernie which had him pinned LBW for 7.  34 for 3 in the 6th over and although BC were scoring well, they were loosing wickets; it would have been worse if Andy and Animal had managed to hold their catches.  Ben and James managed to steady the ship with some good batting, even managing 4’s on the slow outfield.  They took the score to 53 when James was bowled by Wez for a handy 22.  Ben continued with Pramodh and the scoreboard ticked along helped by Jainish who was not having a good bowling day with 18 off his first over.  Luckily Jainish was having a much better day in the field and took an amazing catch at Long Off to dismiss someone – can’t remember who (sorry).

Ben was caught off Andy Emery’s bowling for 20 and the score was 97 for 5 at halfway.  Despite Pramodh remaining unbeaten on 33, his fellow batsmen were about to lose the momentum.  Richard Holt went into the attack and bowled 4 very tidy overs with 1 wicket for 7 runs.  M Khan made a brisk 14 from 10 balls but fell to catch off Andy E in the 22nd over at 122 for 7.  Dilip fell cheaply for 3 to Matt from another catch.  E Khan had a late flurry with some big 6’s but he fell on 13 and Sanoon arrived at the Last man.  He scored 7 before a “Yes, no, sorry, oops” event with Pramodh, who didn’t want a second run, had him run out.  BC were all out for 185 from 28 overs.  PCC had done well in the field with 5 catches but their bowling had been rather wayward and they gave away 43 in extras.

PCC opened with Wez and Gary Moolman facing the quick bowlers of Denzil and lefty Sanoon. PCC started slowly due to accurate bowling and had only managed 17 by the 4th over but they kept their wickets. Gary M defended his wicket well until caught off Pramodh for his 10 runs in the 6th over and the score on 38.

Andy S provided excellent support for Wez who then started to hit out with a barrage of boundaries (6 in 8 balls), aided by some buttery fingers from BC who dropped him twice. Wez was finally caught behind of Pramodh for 48.  67 for 2 in the 12th over and nothing between the teams.  Matt took the crease and immediately smashed a 6.  Soon after, Andy S’s legs proved too short to cover the ground and he was run out by some excellent keeping on 6.  This brought in Simon W who, not wanting to be outdone by Wez, smashed a 6 off his first ball.  They battered the BC bowlers for a 67-run partnership in 7 overs before Simon retired on 50 Not Out.  BC suffered from their buttery fingers as Simon was dropped when on 10!!

Ben was punished by the boundary fest being taken for 37 in 3 overs. By the 19th over PCC were 25 runs ahead on 135 for 4. Jainish didn’t trouble the scorers as had a swing and a miss and was stumped off Rahul.  Andy E went in to support Matt and showed some good defensive shots against Denzil.  Andy finished with 17 not out.  Matt was caught off Talal for very creditable 32 which brought Richard Holt to the crease, but by this time PCC was on 181 for 5 with 5 overs remaining.  Richard only managed 3 before Bernie Lamprecht arrived to score the winning run in the 26th over.  PCC won by 4 wickets and lead this year’s Trophy series 2-0.   In the end there was not much between the teams, but BC suffered from several dropped catches – a theme reflected in the last match in Jan 2020.

Thanks to St Andrew’s School for the use of the ground and to Andy Emery for making all the arrangements.