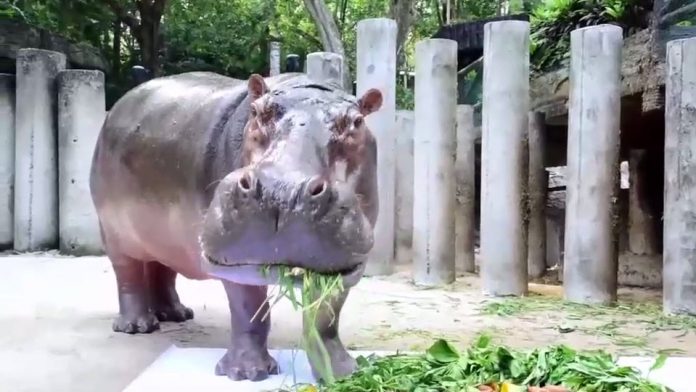 The Pattaya News wishes a very happy birthday to Mother Jasmine, who turns 55 years old on September 8th next week making her what zoo officials say is the oldest hippo in Thailand.

Mother Jasmine was obtained in the summer of 1967 as a child from the Tielberg Zoo in the Netherlands and originally lived in the Dusit Zoo until December of 2018. She then was moved to the Khao Kheow open zoo where she is one of the most popular sights at the zoo and well known with regular visitors.

Mother Jasmine is very healthy, according to staff at the zoo and has never had any health problems. In the wild, a hippo usually only lives to about 40-50 years. However, Mother Jasmine is well past that and some staff at the zoo believe she has a strong chance of reaching the record previously held by a hippo named “Bertha” in the Philippines who lived to age 65 before passing away in 2017.

The Zoo will be celebrating for the next week with a variety of events themed around beloved Mother Jasmine, including special meals, cakes, games, a history display of her life and more.  This will culminate on September 8th, which is her actual 55th birthday. She is regarded as an icon of the park and well respected.

Happy Birthday Mother Jasmine! You can see her in person at the zoo over the next week. For more information call 038-318444