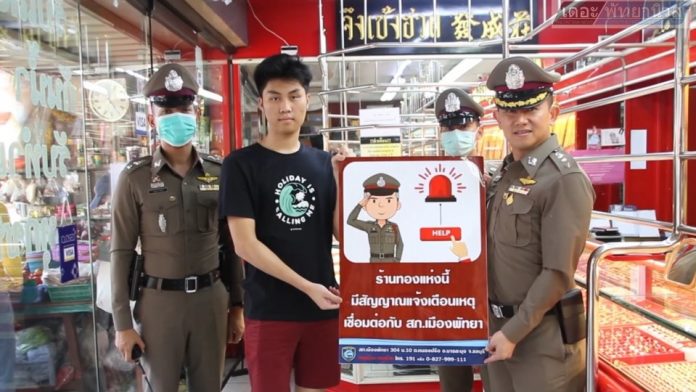 In response to what the Pattaya Police say is a spike in local crimes of opportunity patrols have been stepped up locally and the police are reaching out to support local gold shops.

Lt. Col Nitat stated that due to the Covid19 pandemic situation the economic impact to Pattaya had been particularly harsh. The city normally depends on foreign tourists who are currently not allowed to enter the country due to Covid-19. Last year, Pattaya City was the nineteenth most visited city in the world and had roughly ten million foreign visitors. This year, Thailand as an entire country may only see seven to eight million foreign tourists and almost all of them came from January to March of this year.

As a result, the level of unemployed, destitute and homeless people were rising in the area according to Nitat. He said that most crime being reported currently were not from professional criminals but desperate people who don’t want to hurt anyone but look for opportunities and feel they have no other options. Snatchings of gold necklaces, cell phones and bags have reportedly risen.

Although there have been no bank or gold shop robberies recently Pattaya Police feel they could become a potential target as borders remain closed and many remain out of work. Therefore Police have been touring gold shops in particular and partnering with them on increased security measures.

Lt. Col Nitat also specifically said patrols would be stepped up in the Jomtien Beach area after multiple small petty crimes were reported as taking place, especially at night, on the beach area. He advised that residents do not wear gold or flashy jewelery and keep their personal possessions close. He also advised against carrying large sums of money and calling the police at 191 if you see anything suspicious.

Finally, he said that police and the Chonburi Homeless Shelter were reaching out to the growing number of homeless and offering support and aid, including a bus ticket to their own home province if they are not local. However, many had reportedly refused the offers.