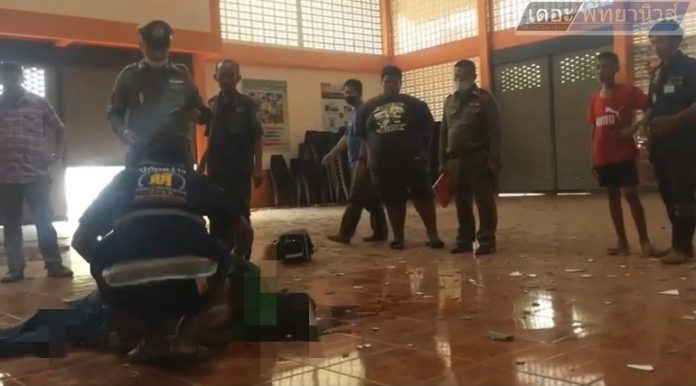 A 63 year old man has died after falling through a school gymnasium roof in front of his three sons in Muneag Chonburi yesterday.

Ban Bueang Police was notified of the incident yesterday afternoon at Wat Khao Maipai School in a gymnasium area.

Emergency responders arrived at the scene to find the body of Mr. Wichean Srinuan, 63, on the ground. Children had not been present at the time of the incident, although one school worker was who fainted and was visibly upset after being resuscitated.

Mr. Udom Saetae, 55, a school janitor, told The Pattaya News that Mr. Wichean was fixing the gymnasium roof which had been damaged from a recent storm.

Mr. Wicean was coming down from the roof for lunch. Rescue workers believe he fell through the roof as that section could not support him properly. He hit the ground which was measured as a 25 meter fall from the roof and was pronounced dead on impact.