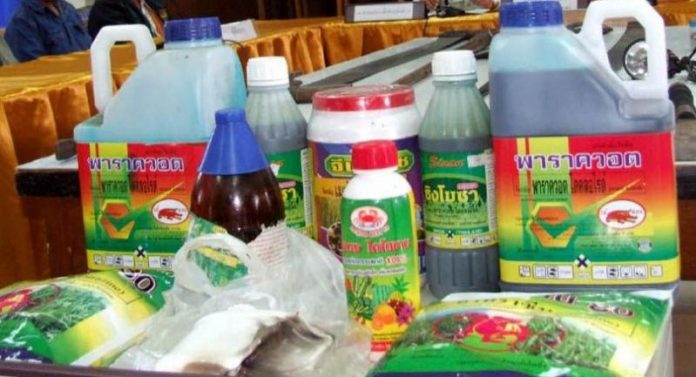 BANGKOK-The government has confirmed the ban on paraquat and chlorpyrifos starting June 1, 2020. Farmers who possess them are advised to return them within 90 days or no later than August 29, 2020.

“Those who have stocks of these chemicals must return them to the sellers within 90 days, or before August 29,” she said. “Sellers must accept the chemicals and submit them, as well as possession information to the Department of Agriculture within 120 days of the ban coming into effect, or before September 28th, 2020.

“The government approved the ban on toxic chemicals because it is concerned about the health and safety of users and consumers,” she added. “The ban is a result of a thorough study and approvals from several related agencies, including the Ministry of Agriculture and Cooperatives, Ministry of Industry, National Hazardous Substances Committee and many agricultural partner networks.”

She went on to say that the Department of Agriculture has already prepared safer substances as a substitute for these toxic chemicals as well as natural alternatives to deal with agricultural pests to minimize the impact of the ban on farmers. She has assured the public that prohibition of the use of such chemicals is good for people’s health and beneficial to all sectors.