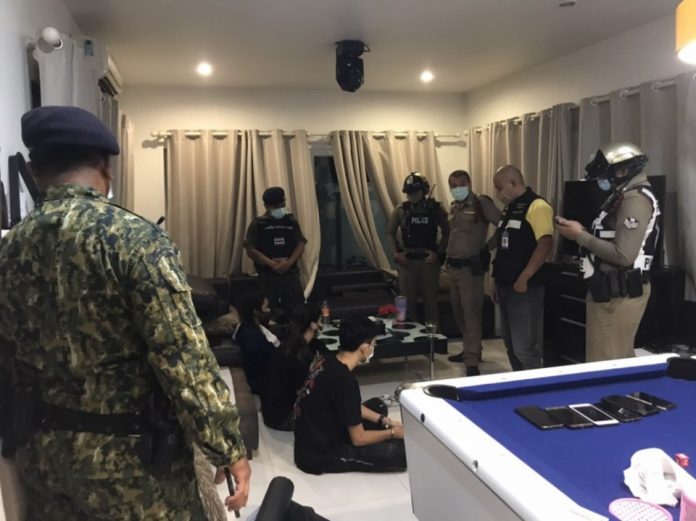 Twelve curfew breakers have been arrested in the Pattaya area after a black Hyundai vehicle broke through a police curfew checkpoint just before midnight yesterday.

The car refused to stop for the checkpoint and caused Banglamung and Pattaya officers to chase after the vehicle before catching them at a North Pattaya intersection.

A video of the raid and traffic stop is here, taken by our team:

Four Thai nationals, all under the age of twenty years old, were found in the vehicle. The group claimed to arresting officers that one of them was allegedly injured and was being taken to a local hospital.

They claimed that they broke through the police checkpoint as they were in a panic. Three of them were taken to a police station for further processing while the other individual was taken to a hospital for an evaluation.

Officers then discovered that eight friends of the group arrested were at a rented villa in a private housing estate on Sukhumvit Road. Police proceeded to raid the villa as parties and gatherings are in violation of the current strict Emergency Decree laws meant to stop the potential spread of the Covid-19 Coronavirus.

In total, 12 young Thai nationals were arrested during the event, eight at the house party and four stemming from the vehicle incident. All face at a minimum emergency decree violations which could result in up to two years in prison and up to a 100,000 baht fine.

Some of the suspects have allegedly admitted that they took some Ketamine drugs the same evening, according to police.

They will be facing further legal action and charges in addition to the violation of emergency decree rules, according to Banglamung Police. All twelve suspects were tested for drugs although the results were