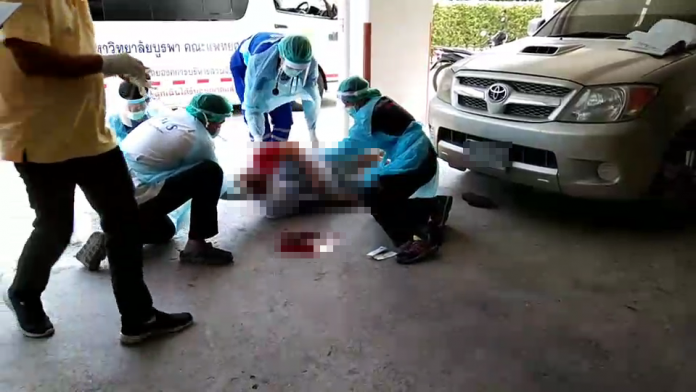 The Chonburi Police have stated to the Associated Press that they have issued an arrest warrant for a prime suspect in the case of what they are calling an attempted murder of his ex-wife’s new husband.

Colonel Thanaset Prachaichaisri, Director of Saen Suk Police Station, told the Thai media this weekend that an arrest warrant had been issued for 38 year old Adisorn Pooljub, who is accused of shooting 26 year old Thanachok Bunthan in a condo parking lot in Saen Suk last week.

Thanachok had been shot in the left ear but survived the attempted murder, according to Colonel Thanaset, and was currently at a hospital at Burapha University. He was on a ventilator and still unconscious as of press time.

Colonel Thanaset told the press that police had already made contact with Adisorn’s relatives and family in their hunt for the suspect. Adisorn had fled after the shooting and according to Thanaset had not made contact with his family or friends and remained in hiding. Colonel Thanaset urged Adisorn to turn himself in, but stated that a large manhunt was underway to locate the suspect.

Adisorn faces charges of attempted murder, illegal possession of firearms and ammunition, and discharging a firearm in a public place.

The Pattaya News will provide updates on this story as they come in.