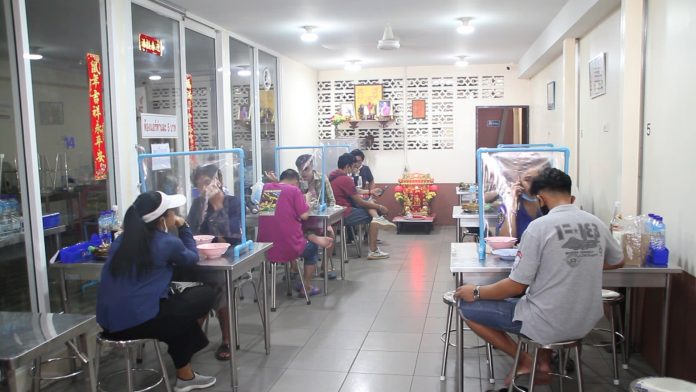 Over the past several days, dine in restaurants in Chonburi, like all over the country, have begun careful and cautious steps towards normality with many re-opening for dine in across the Province and in Pattaya City.

Many restaurants, from a quick drive around town, remain closed for various reasons ranging from concern of meeting the new strict requirements, to staff not being in Pattaya currently and having returned to other provinces with limited ways of currently returning due to domestic travel being discouraged and many cross province transportation methods closed, to some owners making the decision to leave their venue closed until the overall situation in Pattaya improves further.

However, from Sunday, May 3, when restaurants could legally reopen, more venues are either announcing opening or unlocking their doors daily-despite allegedly confusing and mixed messages on regulations and rules to be followed both from the National and local government.

We have published multiple stories on our social media channels and the news about the difficulties both customers and owners are having as they try to adjust to both meeting the regulations and rules as well as ensure customers have a good experience.

Some of the confusion comes from not just hygiene rules like having sanitizer, customers and staff wearing masks and proper physical distancing but also questions around air conditioning and fans, if customers are allowed to sit inside, how many people can sit together if any at all, to having the televisions running, to being able to let customers touch menus, to if the venue can have music playing. The rule around alcohol sales being forbidden at restaurants seems to be universal, although some claimed that this too was being broken at certain venues.

A primary reason for the confusion, according to business owners who have sent letters and spoke with The Pattaya News, is that the regulations released by the national Government are being referred to as “guidelines” by certain law enforcement and local government officials and that certain regulations appear to be stricter locally. We have stated several times that we suggest to call the City Hall Contact Center at 1337 and discuss with them directly the requirements for business owners that are confused. Complaints have also arisen over allegedly some businesses not being inspected or held to the same standard as others since the re-opening.

Meanwhile, customers have been posting on social media and sending letters to the Pattaya News complaining that they are not allowed to sit with their wife or child at some restaurants, that the staff at one restaurant claimed they could not turn on the fans because it was against the law despite it being hot and no air con, being forbidden from moving chairs to their table to provide seating for people they live with, having disruptive plastic partitions placed across the tables, being given time limits to eat, being forbidden from waiting inside a restaurant for a table and being forced into the hot sun and other various complaints.

City Hall officials have stressed to the media that the current period is a “teething” style situation and may be difficult as both customers and owners adjust to the regulations and guidelines. As time passes, the current measures will likely be eased and relaxed as well, officials have said, depending on the overall situation with the Covid-19 Coronavirus. Large restaurants, especially those with Mookata (Thai BBQ) or Buffet style items mostly remain closed, also out of concern of socializing and gathering. Officials have also said that the main purpose of restaurants being open now for dine in is not for an “experience”, to relax or socializing but to purely eat, thus rules like no entertainment, live music, alcohol sales, games like Pool or Snooker, showing television events, etc.

Have you gone to a dine in restaurant recently in Pattaya? How was it? Tell us in the comments below.