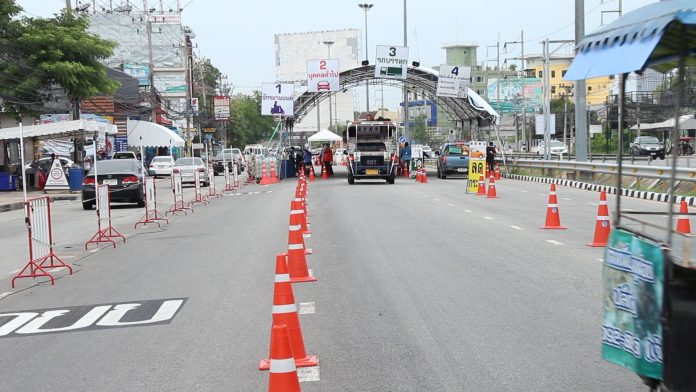 Pattaya City Mayor Sonthaya Khunpluem, along with the Banglamung Sheriff and other city leaders visited all major road checkpoints in Pattaya this evening personally to thank all the staff for their three weeks of hard work.

Since mid April the city of Pattaya has been under a restrictive order to close off the city proper and only allow access to residents and those who work in the city. The closure was a major inconvenience for the many expats and residents who live in Nongprue and Banglamung but was deemed necessary by the Chonburi Communicable Disease Committee and the Thai Ministry of Public Health

The closure was to help allow mass screening of thousands of residents and some foreign tourists in the city which all took place at a field hospital at the Grand Bella hotel to help identify if there was a possible issue with the virus in the city or if there were a large number of asymptomatic carriers. The screenings had been done on high risk individuals such as those who still worked with the public like supermarket workers, taxi drivers and Immigration agents. The tests also screened those who lived or worked in places with a confirmed previous case of Covid-19.

The screenings were considered a success, finding only four connected cases from a person who visited Phuket. No hidden cases of Covid-19 were found. The last cases found in the Pattaya area was three weeks ago and the last cases in Banglamung were on April 19.

As a result, Pattaya City has now been deemed a white zone by the Thai Government, which means it is not at risk currently for the Covid19 virus. The city was previously a red zone during the closure period which meant it was an ongoing infection zone due to a high number of cases found in March and early April, even though nearly all were imported.

Mayor Sonthaya stressed that we should not be letting down our guard and still should only be traveling if it is essential but that the removal of the checkpoints was a slow step towards returning Pattaya to a world class tourism city and reopening businesses.

The Mayor also thanked all local residents for cooperating with both the checkpoints and hygiene measures.