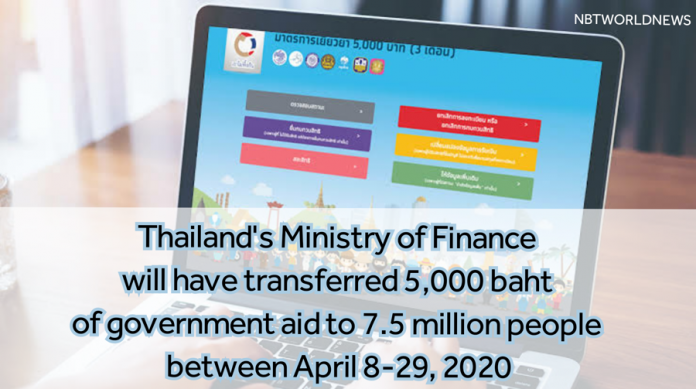 BANGKOK (NNT) – According to its report, the Ministry of Finance will have transferred 5,000 baht of government aid to 7.5 million people between 8th to 29th of April, a total of thirty eight billion baht.

Mr. Lawaron Sangsanit, director of Fiscal Policy Office and Spokesperson for Ministry of Finance revealed that, between 8th and 24th of April, the ministry had already transferred the aid to 4.9 million people, equivalent to twenty five billion baht. Between 27th and 28th April, another 1.5 million people are expected to receive the aid, the ministry has already transferred to seven hundred thousand people and the other eight hundred thousand will receive it today.

Tomorrow, the 29th, there are 1.1 million people expected to receive the aid which is the highest number of recipients in one day.

In addition, there are already 940 thousand applicants whose registrations have been cancelled and 3.4 million people appealed decisions against disqualification.

The other group of 6.3 million applicants are required to provide more information, and there have already been 5.2 million people who have provided the additional details.

The ministry advised the rest of the applicants to provide the information as soon as possible at www.เราไม่ทิ้งกัน.com in order to receive the aid.