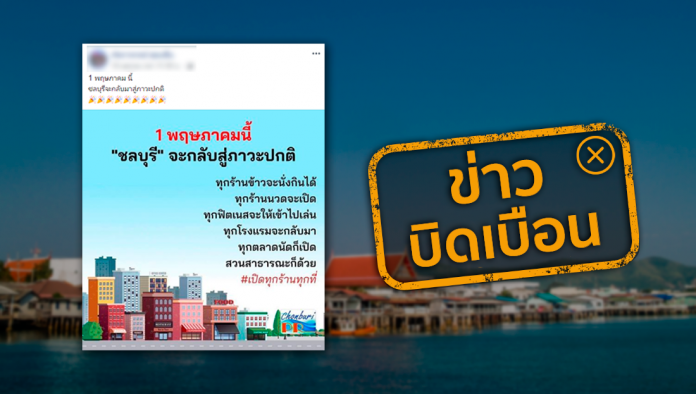 The Thai Anti-Fake News Center posted a notice this evening correcting and adding further insight to images and information posted by Chonburi Public Relations earlier this month in which several pictures and posts stated that most business was likely to re-open on May 1.

The notice, in Thai, can be found here:

The Pattaya News and multiple other news sources also repeated this information, although we cautioned that any business opening was based on improvement of the overall Covid-19 situation as well as the overall state of the country as a whole. We also clarified that the Chonburi Government had indeed changed all previous orders to expire as of May 1st, ending all current restrictions, but made it clear that future orders and restrictions could and likely would be implemented before this date.

The Anti Fake News Center reported that the posts were a “misunderstanding” and that as explained and clarified by Chonburi PR meant that everyone “wished” to return to normal and that it was dependent on the situation in Chonburi as well as the country as a whole.

Chonburi PR and the Anti Fake News center stated that “returning to normal” was entirely based on the overall Covid-19 situation but there were no guarantees as to what, if any, business may open or restrictions may be lifted as of May 1. Chonburi Public Relations has also stated on their PR page this evening that more information on orders, if any, will come towards the end of next week and that nothing is currently set in stone.

This update comes as the Public Health Ministry assists in advising the Covid-19 Center for Situation Administration (CCSA) in policies and suggestions for possibly easing restrictions around Covid-19 in the future. Of note, they listed that Chonburi, along with other provinces with higher levels of infections, would likely be re-opened at later dates based on a plan being developed, but not yet official nor finalized. Bars and nightlife, which dominate Pattaya, were not on the list of business likely to be opened initially under eased restrictions.

Chonburi has a total of 85 cases recorded of Covid-19 since the start of the outbreak, however the majority have since recovered. Out of the last nine days, seven have had zero new infections found. Thailand recorded the lowest number of daily infections in over a month today with only nineteen new cases of the novel Coronavirus found country wide.

Chonburi, which is where Pattaya is located, is highly reliant on tourism, with Pattaya containing thousands of bars, karaoke lounges, gogos, nightclubs and other nightlife venues in a city that is known across the world for its tourism, party scene and nightlife. Estimates from Pattaya City Hall state that close to 80 percent of the cities yearly revenue comes directly from tourism. Due to Covid-19, nearly every business is currently closed, leading to long lines for charity in the resort town dominating local and National news as tens of thousands locally and millions across the country are out of work.