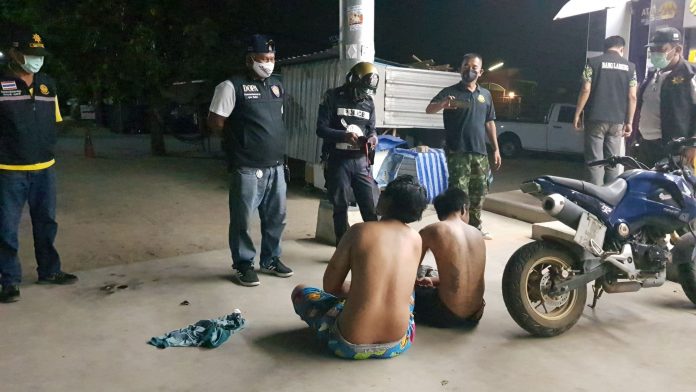 Two drunken Thai men, who were not named to the press, were arrested by Banglamung Police last night at 11:00 PM near the Ban Rong Poh market in Banglamung during the National Thai Curfew after allegedly trying to break into a 7-11, setting off a burglar alarm, to purchase booze.

A video can be found here:

The Pattaya News notes that sales of alcohol period is also against the law right now due to an order released by the Chonburi Governor to help encourage social distancing and discourage gatherings.

The incident took place at a 7-11 near the Takhian Tia Night Market. The two shirtless men, who were heavily intoxicated, arrived and tried to enter the closed store to purchase alcohol. An employee who was off duty told them the shop was closed and they could not sell liquor. The men became angry and shook vending machines at the front of the shop demanding entry. This set off a burglar alarm which caused the men to flee.

They were later arrested near another 7-11 close to the Ban Rong Poh market where they were found allegedly shaking an ATM. When the police arrived, the men also allegedly pulled out their genitals and challenged the police to a “pissing contest”.

The men were arrested and will face harsh punishment under the emergency decree currently in effect to help stop the spread of Covid-19. They face up to two years in jail as well as up to a one hundred thousand baht fine.