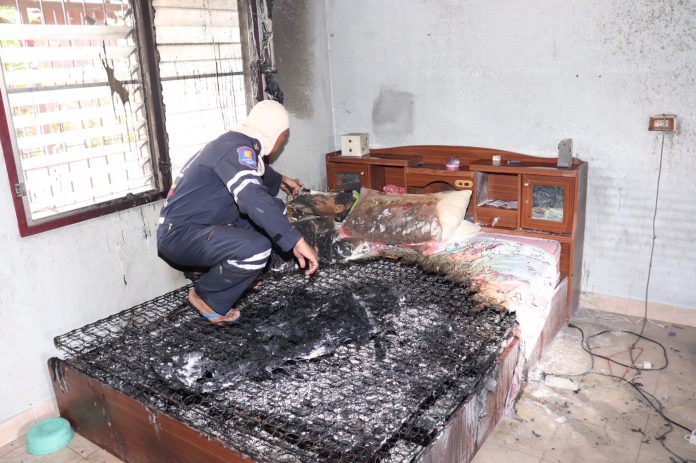 Pattaya –
A woman has been rescued by local firefighters after being locked inside a burning room in Pattaya.

Rescue workers were notified of the incident at 4:00PM yesterday at an apartment in Soi 8 Nongyai.

Fire fighters and rescue workers arrived at the two story apartment and found that they could not enter the room as it was locked from the outside with a padlock.

They broke the door down to gain access and put out the fire. Ms Sansanee Yuprasert, 32, was found inside the toilet hiding in a corner, unable to escape the room.

She had sustained minor injuries from the fire and smoke and was taken to a local hospital. The fire was placed under control. Signs of drug usage and equipment was also found in the room.

The apartment complex owner told The Pattaya News that he was notified of the fire by another resident and he immediately called the fire department. The woman was alone in the room while a man she lived with went to work. The man had locked the door from the outside with a padlock so the woman was unable to flee the fire. The man has not been identified at this time.

Pattaya Police are continuing their investigation to find the exact cause of the fire. They are also investigating over the drug related items found and as to why the other resident of the room regularly locked the woman inside.